A new report by lesbian, gay, bi and trans equality charity Stonewall and BritainThinks – Shut Out –reveals for the first-time what life is like for LGBT young people who are not in education, employment or training (NEET).

The research shows that anti-LGBT bullying, lack of support at home or visible role models can have a devastating impact on LGBT young people’s mental health, and lead many to being ‘shut out’ of higher education and work. The report finds that once out of school and employment, LGBT young people are slipping through the gaps and face significant obstacles to re-entering education and work.

Through in-depth interviews and workshops, 30 LGBT young people were asked about their experiences of being not in education, training and employment, their mental health experiences and what would help them in the future.

Key findings show why these young people left education, training and employment, including:

The report goes on to show that once out of education and employment, mental health struggles and difficulties accessing opportunities continue to hold LGBT young people back and prevent them from reaching their full potential.

The new report found that a breakdown in relationships with family, including rejection from family members due to being LGBT, was a key challenge for many LGBT young people.

Sean, a 24-year-old trans man from England, said: ‘My mum didn’t want me to transition, so I ended up moving into a hostel for a while.’

My mum didn’t want me to transition, so I ended up moving into a hostel for a while.'

Previous research from Stonewall has found that only half of lesbian, gay and bi people (46 per cent) and trans people (47 per cent) feel able to be open about their sexual orientation or gender identity to everyone in their family.

Shut Out shows how difficult family relationships can leave LGBT young people without support, which can have a profound impact on their mental health and ability to stay in education or work.

Bullying in the classroom

Many of the young LGBT people interviewed expressed how experiences of bullying, coupled with a lack of support from teachers, led them to become disengaged from their education.

Aiden, a 21-year-old gay man from Scotland, said ‘At school, the bullying was really related to me being gay…I had to have a lot of time off when I was in school because of this discrimination. When I turned 18, I just stopped going.’

The first time I experienced depression was when I was 14. I was young and in care, and I got feelings for a girl.

The combination of these factors is preventing some LGBT young people from achieving their goals by shutting them out of education and limiting employment opportunities.

Adela, a 23 year old bi/pan woman from Wales said: ‘The first time I experienced depression was when I was 14. I was young and in care, and I got feelings for a girl.'

Mathew who is 21, gender-questioning and from Scotland said: ‘I was nervous about [leaving the house] because of the amount of times I’ve been bullied as a kid. I sometimes couldn't bring myself to leave my front door.’

Leaving education to go to university or enter the workforce is a tricky transition for some LGBT young people. Of those that did go on to university, many felt forced to stop their studies due to unwelcoming environments which made their mental health worse.

Participants also shared their experiences of feeling forced to leave jobs because of anti-LGBT bullying, while some put off applying for positions as they feared they would be discriminated against. Stonewall research revealed that almost one in five LGBT people (18 per cent) looking for work have faced discrimination trying to get a job because of who they are.

He was anti-LGBT, and said that if any employees were gay, he’d fire them. So I left … I felt unsafe as an LGBT person.

Jamie, a 19-year-old non-binary person from England, spoke about their experience of being managed by someone who was openly homophobic: ‘He was a dodgy boss. He made me feel unsafe. He was anti-LGBT, and said that if any employees were gay, he’d fire them. So I left… I felt unsafe as an LGBT person.’

The LGBT young people interviewed described how challenging it was to re-enter education, employment and training once they had become shut out. A range of factors led to them being unable to get back into work or school, including poor mental and physical health.

The report also found that many of the young LGBT people lacked the practical support and knowledge they needed to find training opportunities and routes into work. As a result, the charity is calling for better mental health support for LGBT young people and specific careers guidance to help those that are shut out of education and employment.

Mo Wiltshire, Director of Education and Youth at Stonewall, said: ‘For the first time, this research sheds light on the challenges that young lesbian, gay, bi and trans people have faced, leading them to become shut out of education, employment or training.

Schools, colleges, local authorities and employers need to open their doors to LGBT young people, starting by creating environments in which everyone can thrive.

‘This research has brought up many areas which we know present particular difficulty for LGBT people, such as bullying and a lack of support from their school days right through to the workplace. But now we can see that these challenges have lasting impacts, which is why it’s time to act.

‘Schools, colleges, local authorities and employers need to open their doors to LGBT young people, starting by creating environments in which everyone can thrive. No one should be shut out of education or work because they are LGBT, and we will keep fighting until every LGBT person has the support they need to be themselves and reach their full potential.’ 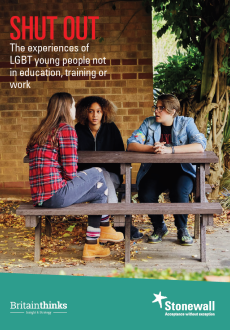 Donate to support our vital work to end discrimination. 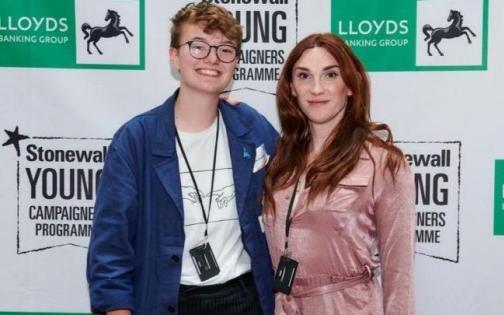