Lesbian, gay, bi and trans (LGBT) people have always existed and always will exist. We are not going anywhere, and we’re certainly not a trend.

In the face of rising homophobia, biphobia and transphobia in the UK, it is essential that we remind ourselves, and each other, that life now is not how it always will be, or how it always has been. In fact, history is full of us – when we look back, we find many people we might now consider LGBT.

When LGBT histories and people have so often been silenced or erased, it’s even more important that, this LGBT History Month, we highlight some of the lesser known stories from our shared past.

Eleanor Rykener is one such case. In 1394, Eleanor was arrested in London for being a sex worker. She had previously worked as both an embroiderer and sex worker in Oxford and London – two roles that were reserved for women at the time.

However, after her arrest, officials discovered that Eleanor was in fact assigned male at birth. Not only this, but she stated that she had sex with both men and women: seemingly, Eleanor Rykener was what I’d describe as a queer trans woman in medieval England.

Hervard certainly acted in a way that challenged conventional gender in his culture.

Another example of medieval trans people comes from Icelandic culture. The Saga of King Heidrek the Wise includes the legendary tale of Hervard, who was named Hervor at birth but later changed his name to reflect his gender. As a child, he was encouraged to engage with feminised activities such as embroidery, but his skills with a sword and bow were much stronger.

When he was older, he asked his mother to help him wear traditional male dress and went travelling as a Viking. He later returned to taking on the role of a woman, but this is why it is so important for us to understand people within their cultural contexts: our view of what ‘trans’ means now is not universal, but Hervard certainly acted in a way that challenged conventional gender in his culture.

We should also remember that lots of these histories are based around Western ideas of gender, and what it means to be male, female, or something else entirely.

In one of our blogs for Black History Month, Leah Buckle highlighted the extent to which British colonialism imported homophobia, biphobia, transphobia and strict gender roles, destroying the (often more relaxed) way people had thought and acted around LGBT identities for centuries previously.

Finally, while there’s a common assumption that gender-neutral language is a recent invention, history shows us that the singular pronoun ‘they’ has been around for centuries.

It has been used by some of the most famous writers in the English language, with Geoffrey Chaucer being a famous early example. In The Canterbury Tales, from around 1395, Chaucer wrote ‘and whoever finds him out of such blame, they will come up.’ Shakespeare used the singular ‘they’, too. In The Comedy of Errors, in 1594, he wrote ‘There’s not a man I meet but doth salute as if I were their well-acquainted friend’.

The fact that we do now have words for what were previously unnamed identities is a beautiful thing.

Gender-neutral language and the people it describes aren’t new, even if words such as non-binary and genderqueer didn’t exist in the past.

The fact that we do now have words for what were previously unnamed identities is a beautiful thing, and is all thanks to activists determined to create a world in which trans people can live as their trues selves. A big part of this is having language that allows us to describe ourselves in a way that feels accurate and empowering.

It’s clear, then, that lesbian, gay, bi, and especially trans, identities are not a trend: our varied genders and sexualities have existed for as long as people have existed, in every culture, society, and country. And it’s encouraging to see that, even in the face of extreme homophobia, biphobia and transphobia, more and more of our histories are being uncovered and told.

It’s vital that we continue to share these stories and celebrate our community’s long, empowering history – not just this LGBT History Month, but always. 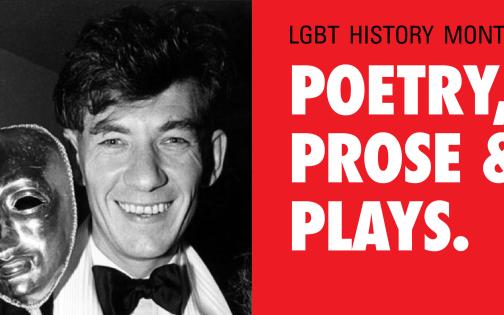