An intergenerational Q&A about LGBTQ+ education in schools.

Claire Dowie and Rachel Watkeys-Dowie are a mother and daughter who both identify as queer. Claire is 64, grew up in Birmingham and made a career in playwriting, stand-up comedy and performance. Rachel is 28, grew up in London and works as a TV producer and stand-up comedian.

As part of our inclusive education campaign, we wanted to understand what school was like for LGBTQ+ people from different generations. We set up a Q&A between Rachel and Claire to find out how much – or how little – had changed when it came to learning about LGBTQ+ identities and issues in school, 35 years apart.

Their answers show how transformative a truly inclusive education could be, and how little support and guidance many LGBTQ+ young people have while in school. Help us give more LGBTQ+ children and young people the start in life they deserve by donating today.

Claire, do you remember being taught anything about queer people, or issues, at school?

No, not a thing. Next question!

There was nothing – even more so because I went to an all-girls’ school. There was no talk of anything untoward. 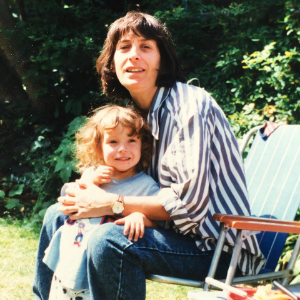 Claire and Rachel in the garden.

Did you learn anything from peers while you were young, or was it not until you were an adult that you started to realise what it could mean to be LGBTQ+?

I think I saw The Killing of Sister George on telly. And I thought, ‘Oh, that's what it's all about’. Before that, I never heard anything. Apart from people sort of muttering – about blokes, mostly – being a little bit effeminate or ‘good to his mother’. There was nothing blatantly obvious.

It was kind of accepted for women to live together then. It was spoken about as they were spinsters who couldn't get a man – but there was never any idea about being lesbian or gay, and certainly not queer.

There was no education in schools or in culture. Even though you had people like Kenneth Williams on the radio speaking Polari, you didn't think of it as being gay. There was never any discussion of people being in couples. So Kenneth Williams was an effeminate man, but you'd never imagine that meant he could be in a relationship with another man.

There was no education in schools or in culture.

And moving on to when Section 28 was being brought in. Do you remember what the climate felt like then? Did it feel like a rollback?

No. Back then, you had women's liberation, gay liberation, Black liberation, all coming around the time, around the late 70s, early 80s. It was fabulous being a female stand-up then because all the blokes had to listen to you for the first time ever, because it was trendy.

And when you were having kids five years later, were you thinking about what it would be like for them at school, or did feel it would still be much better than it was for you?

Honestly, I was more concerned with myself! I was freaking out because I was quite a butch dyke before then. I got through school being a comedian and a little bit of a bully.

At my school dance, everybody danced with me. As one girl said: you're the only boy in the building, so everybody wants to dance with you. I felt like I was in heaven.

So I thought: if I got through school OK, so would they. 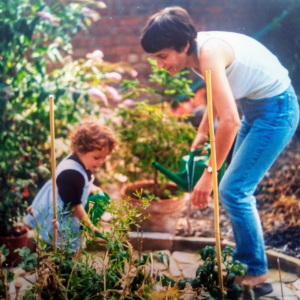 Claire and Rachel watering their plants.

Did you think about what you would say to Rachel and Mike about being from a queer family, or was it something that didn’t need to be discussed explicitly?

Claire: It was never an issue. To be honest, I don’t see it that way and it never occurs to me. I always thought: why should I announce my sexuality, when it kind of fluctuates anyway?

Rachel: I remember one of my school friends said, ‘Oh your mum's a lesbian,’ and I was like, ‘What?!’. I knew that my family were queer but ‘lesbian’ felt like a dirty word in school. That was interesting because it hadn't been made into a big deal at home, and so I hadn’t equated those two words before.

Whenever we did lessons that could’ve included those topics, I sat there terrified that they would talk about being gay.

Rachel, by the time you were in secondary school Section 28 was gone, and it was fine to talk about LGBTQ+ people and issues in the classroom. Did you witness that?

Not even a little bit. Literally not at all. Not in Sex Ed, there weren’t any special classes or anything like that. Teachers were completely unequipped.

Whenever we did lessons that could’ve included those topics, I sat there terrified that they would talk about being gay. I was scared that if people got given definitions or terminology, then I’d be labelled as the lesbian and excluded or bullied in a way that I never had been before. I felt like I was allowed to exist in the way that I was because there was no definition for me. I was just allowed to be Rachel. So I was genuinely nervous in those Sex Education classes. I was like, I can't let that happen. I probably would’ve left class if they'd done that.

What about outside of lessons themselves?

We had one student who went around trying to educate people. ‘Gay’ was used as a derogatory term all the time – ‘That's rubbish, that's so gay’. When this guy heard people doing that he’d come back with: ‘Why are you saying that? What do you think gay is?’ and even call out the teachers for not doing anything about it.

That was amazing, but the flipside was that he was bullied so badly that at break or lunch he was kept in a classroom so that the other students couldn't get him. Instead of dealing with the homophobic bullying they just kept him away from everyone else.

The reality was that my teachers weren’t going to deliver that education in a confident way that celebrated LGBTQ+ people.

So bearing in mind your school environment, it might have been worse if you had inclusive Sex Ed?

Claire: It depends how they teach the lesson. If they're going to introduce you as an adjunct to what is normal, then obviously people are going to attack it. Teenagers are trying so hard to be normal.

Rachel: I think if I'd had any kind of education on sexuality or gender at school, it would've just been someone saying, ‘This is the label that’s used if you're a girl who dates other girls’.

The reality was that my teachers weren’t going to deliver that education in a confident way that celebrated LGBTQ+ people. Whereas being shown examples of brilliant people doing something different, being shown people who are just living their lives and loving it... that is what actually makes you feel seen. And you can relate to it in your own private way without feeling singled out.

And since you weren't taught this stuff at school, who filled in those gaps?

Rachel: It was Mum. Yeah, so it's completely unfair of me to say any of this. I was raised by Mum and Dad who are both super queer. The door was always open – I knew they’d always engage with me and tell me the truth.

Sexuality never really came into it, particularly by the time I was dating. But there were times when I came home and said, ‘Everyone's asking if I'm a boy or a girl and I don't know what to do’. The answer was never, ‘You should wear a dress or grow your hair longer or stop acting like a boy’.

Having Mum as a parent meant I had a level of confidence in being masculine presenting, in having a queer identity, that a lot of people didn't.

Can you try and summarise what you think the main similarities and differences were in your experiences at school?

Claire: I was the boy in a female school. And you were probably the boy in the mixed school.

Rachel: I was just allowed to be something different. Just outside it. Also bisexuality really came into fashion, which helped me out. When Jessie J came out as bi and then Katy Perry was singing ‘I kissed a girl and I liked it’, all the girls felt like, ‘Oh, I've got to kiss a girl’. And actually a lot of them maybe didn't actually fancy girls, so then it was almost… ‘Well, Rachel is excellent at almost being a boy’.

Claire: But I did mine in secret.

Rachel: And I was allowed to do mine openly. And also having the extra bolstering of not having to feel wrong the whole time, or not having the same level of doubt. There was at least that sense of: Mum's done this, and she turned out OK.

The younger you can start people off, understanding that there's so many millions of types of people, the better.

In an ideal world, we’d like to see really inclusive school environments from an early age. So using a range of picture books showing different types of families, talking about LGBTQ+ role models in lessons in an incidental way. Basically embedding it across the curriculum rather than: in one lesson, we're going to mention this one thing. How do you think that sounds?

Claire: The younger you can start people off, understanding that there's so many millions of types of people, the better. Doing it as a teenager is almost the worst possible time – there's a pecking order and they're all aware that they don't want to be the misfit. The conditioning of people to be ‘normal’ starts incredibly early and so pushing back on that early on is crucial.

[My partner] will tell you, he lost his dad when he was four – and when he went to primary school, the teacher told the class, ‘Write a story about your daddy’. And he didn't have one. It’s the same principle.

Rachel: It others you. And when you’re only showing picture books with mummy and daddy, when you’re dressing kids just in pink or in blue, you’re already maintaining a straight status quo. It’s so all-consuming from an early age.

I totally agree that the subtle, inclusive approach from a young age, but not making a big thing about it, is absolutely the way to go. I think that would’ve been amazing. I kind of had that from having you guys as parents but if I'd had that at school as well… I would have been possibly too confident! 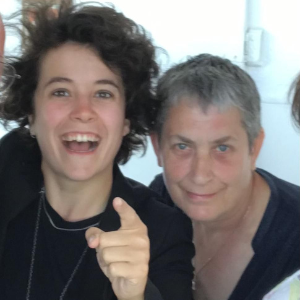 Rachel and Claire at a recent family party.

All LGBTQ+ children and young people deserve an education that reflects who they are. Join us in building a world where LGBTQ+ youth are safe, seen and heard. Stop the threats to LGBTQ+ inclusive education and donate today.

Find out about our campaign for LGBTQ-inclusive education: #HearQueerYouth. 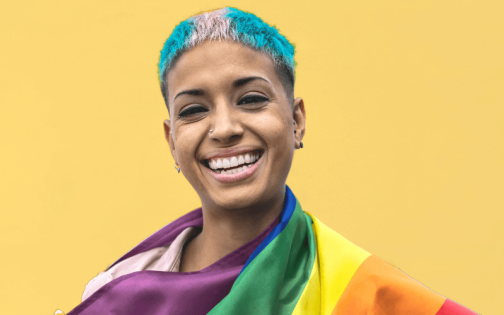 LGBTQ+ or not, a truly inclusive education system benefits everyone – here’s why 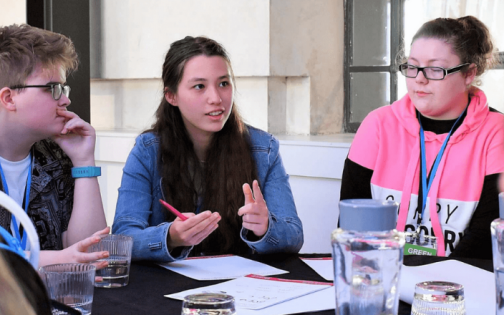