The ground-breaking study was conducted last year by a coalition of LGBT+ charities in conjunction with Richard Matousek, an independent research monitor, and shows that Gender Identity “Conversion Therapy” (GICT) is more widespread and often more violent than has previously been understood.

The research involved 450 respondents who stated that their gender identity did not match the sex assigned to them at birth. This included 170 respondents who identified as non- binary. In total 64 people had been offered Gender Identity “Conversion Therapy” and 39 had undergone it. Of those, nearly half had been forced through it.

Jayne Ozanne, who was responsible for forming the coalition, explained: “This research shows the devastating impact of so-called “conversion therapy” on gender diverse people, and the harm that they have so often been forced to endure. We are particularly concerned about the role that religion has found to have played, both in terms of motivating an individual to pursue to and also in terms of those practising it. It is critical that any future government legislation gives clear protections to gender diverse people.”

The UK Government must not leave these people out in the cold.

Commenting on the results, Eloise Stonborough, Associate Director of Policy and Research at Stonewall said: “The survey findings are eye-opening and heart-breaking. Those who had gone through Gender Identity Conversion Therapy experienced a range of harmful practices, including isolation, forced feeding, beatings, and sexual violence. This is happening to both children and adults, with over half being under-18 at the time they underwent so-called ‘conversion therapy’. The UK Government must not leave these people out in the cold. We urge them to make good on their commitment to ban conversion therapy and ensure no more gender diverse people have to go through such damaging, demeaning and degrading practices.”

Richard Matousek volunteered as an Independent Research Monitor for the project and provided a framework for the results to be analysed. Commenting on the findings he said: “This report presents ground-breaking data on the effects of Gender Identity Conversion Therapy (GICT) in the UK. The data (which should be approached as qualitative and demonstrative rather than as statistically robust quantitative data) give important, rich insights into what some gender diverse people have been suffering up to now.”

The research is consistent with the government’s own 2018 LGBT Survey, which found that “trans respondents were much more likely to have undergone or been offered conversion therapy (13%) than cisgender respondents (7%)”. The Secretary of State, Rt Hon Liz Truss, has promised that the UK government will bring forward legislation for a ban on “conversion therapy” shortly. 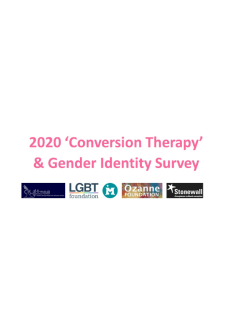 Together we can put an end to conversion therapy. Donate today and help us secure a legislative ban on this damaging practice. 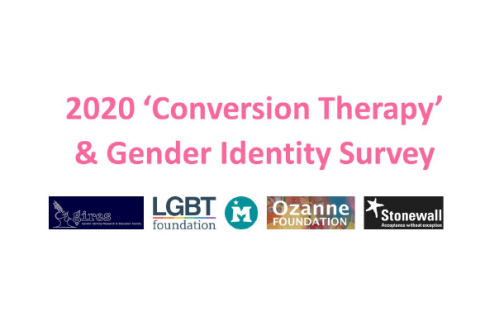