What does it mean to be non-binary? For me, it means freedom and joy.

To be non-binary is to exist outside of society’s confines and expectations. It’s to look at the world around me and to challenge its restrictive rules. To know that my existence is expansive and cannot be contained. Angela Davis said: ‘You have to act as if it were possible to radically transform the world. And you have to do it all the time.' Being non-binary allows me to act as if it were possible to exist in a world not broken into two binary genders. It allows me to imagine a world where my gender is not weaponised against me, but celebrated as an aspect of my multi-faceted being – and it allows me to do this all the time.

Being non-binary opens a world of possibilities.

Being non-binary opens a world of possibilities – both for the ways in which we express ourselves and the ways in which we interact with those around us. A common misconception is that all non-binary identities sit somewhere in the middle of male and female, and that if you’re non-binary you’ll fit neatly into a box labelled ‘androgynous’. But this really isn’t the case – and one of the most liberating things about being non-binary is that there are no set rules around how you express or experience your gender. Your gender might occupy many different spaces in a large colourful circle around the linear binary existence, it might shift and change daily, or it might feel non-existent.

But while being non-binary allows me to play with gender, laugh at my own physical entity, and occupy as much space as feels most comfortable, I’m also forced to confront the fact that others will perceive me as gendered whether I like it or not, and that there are very real barriers that stop me from having my identity recognised in society.

Currently in the UK, non-binary people don’t have legal recognition. This means having to choose ‘male’ or ‘female’ on official documents like passports, driving licences, marriage certificates, and even, for those of us who medically transition, on our Gender Recognition Certificates. Add to this the daily decisions we’re forced to make around places like bathrooms and changing rooms, and the fact that we’re prescribed binary gendered labels by strangers who look at our bodies, clothes, hair – or hear our voices – and decide whether to address us as ‘sir or ‘madam’. Society consistently erases the non-binary existence and tells us that we’re merely an inconvenience.

So what’s the solution? Unsurprisingly, there’s no simple answer.

Recently, a petition to make non-binary a legally recognised gender identity in the UK received over 138,000 signatures. Some have raised concerns about how this might impact our safety – for example if individuals with non-binary gender markers on their passports wanted to travel to countries with anti-LGBTQ+ laws. There are also questions around whether asking to be included within a system that is inherently oppressive legitimises it.

At the same time, it’s clear that something fundamental needs to change if non-binary people’s identities are to be validated in our society. Alongside calls for legal recognition, others have suggested that a better route may be to remove gender markers on documents altogether. They argue that this would put everyone on an equal footing, rather than simply turning a restrictive two-box system into slightly less restrictive three-box system.

I still dream of a world where gender is not a chore, but a celebration.

A recent, heartening ruling found that non-binary people could be protected by the Equality Act. These logistical wins are significant – with them comes a certain level of acceptance that makes it easier for non-binary people to navigate life on a day-to-day basis. But I still dream of a world where gender is not a chore, but a celebration; where the status quo is not one where we must fight daily simply to be included, but one where the diversity of the human existence is woven into the fabric of society. We must continue working to dismantle the binary categories that restrict all of us, and throw the boxes in the recycling bin where they belong.

Want to know how to be a better ally to non-binary people? We've written our top tips in this article. 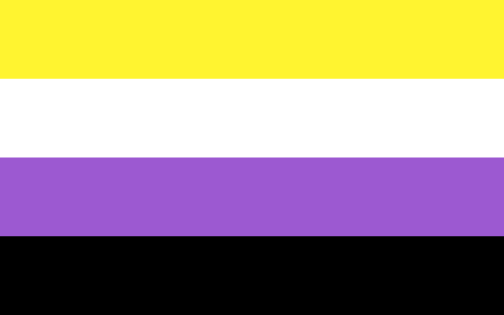 Non-binary Day of Visibility - poster pack for schools and colleges