This Pride Month, we’re inviting members of our wonderfully diverse community to speak up on why we’re #ProuderTogether. To kick things off, Prishita Maheshwari-Aplin, Stonewall’s Storytelling Lead, reminds us that pride began as a protest – and while we’ve come a long way, there’s still a long way to go before LGBTQ+ people have true equality.

Pride is a time for the LGBTQ+ community to come together and celebrate. We have so much to be proud of – from our resilience to our capacity for love. And this season encourages us to celebrate ourselves, our identities, and all that we have won so far.

But Pride is also a protest.

We must take this time to remember that there is still progress to be made, and that social injustice remains a reality for many of us.

With an increase in transphobia, continued persecution of LGBTQ+ people across the world, and ever-present racism even within the LGBTQ+ community, we must continue to work together towards a better future for everyone in our communities. We are seeing ever-increasing number of organisations turning rainbow-coloured to mark Pride as this month gains visibility and attention, but this alone does not represent equality – centring and uplifting community actions and organisations remains vital.

Because Pride is a time to use our voices and speak up in solidating with all members of our beautiful, diverse, global community.

It’s worth remembering that the first ever Pride was a march, not a parade. It was called the Christopher Street Liberation March, and it marked a year since the 1969 Stonewall Uprising in New York. The uprising was a series of community-led violent rebellions in response to consistent, targeted harassment by the police. These rebellions set in motion many protests and campaigns that ultimately led to important wins for the LGBTQ+ community in the West. But in 2021, the fight is far from over.

The past year has made clear the importance of protest and solidarity.

Solidarity is not a noun but a verb – it is a recognition of the fact that when marginalised communities channel our collective power, we are stronger than ever.

Recently, we’ve seen the Black Lives Matter movement spreading across the world, hundreds of thousands speaking up for Palestine, thousands in the UK gathering at #KillTheBill protests, and 200 community members demanding Lakhvir Singh and Chef Sumit Sehdev’s release from immigration detention back into their homes Pollokshields, Glasgow. Global and local movements such as these have shown that, when raised together, our voices still hold great power.

So this Pride, let’s remember that none of us are free until all of us are free. And let’s raise our voices until we have built a brighter, safer future for those of us who are most marginalised and exploited.

Pride events across the UK

Pride events, protests and rallies are being organised by local LGBTQ+ community organisations across the UK. Why not attend to show your support for their work and to speak up for your rights?

When organising and attending in-person events, it’s important to ensure our own and others’ safety.

If you’re attending a protest, make sure to read the advice provided by community organisations below in order to keep yourself and those around you safe.

5 key messages to know your rights on protests. 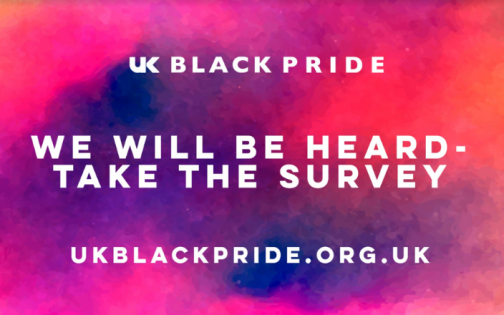 Celebrating Us: why taking the UK Black Pride's inaugural Community Survey is so important.

There is no place for racism at Pride