Today, the Equality and Human Rights Commission published a new report on public attitudes to trans people – drawing on data from the British Social Attitudes Survey.

At the moment, trans people’s lives are an almost constant part of our media narrative. But while the media can help reflect societal views and trends, it doesn’t give us a true impression of how people are thinking and feeling about things in real time. That’s why this data is so important.

So, what does it tell us?

Well, this data confirms a lot that we already knew. The first is that public attitudes to trans people are broadly positive. When asked about transphobia, we can see that transphobia is seen as ‘A Very Bad Thing’, and women, young people and people with higher educational qualifications are all more likely to feel positively towards trans folk. 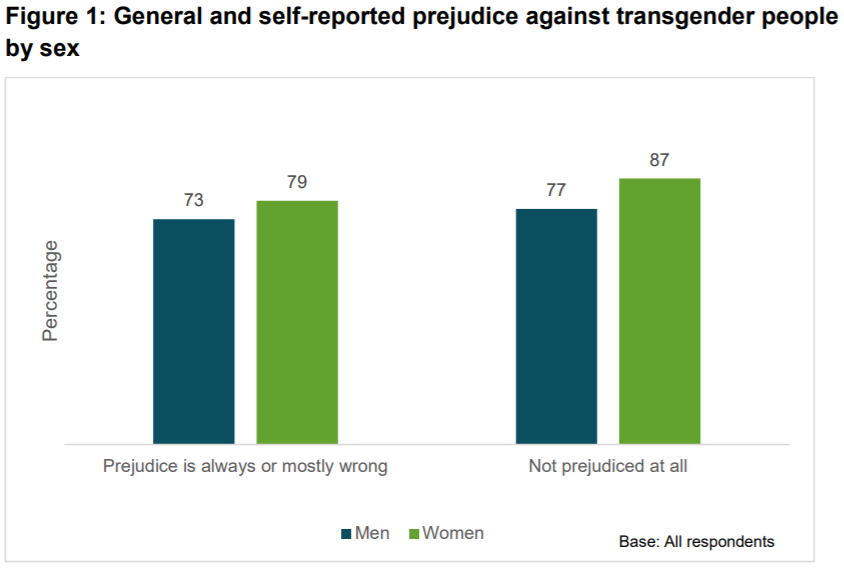 Secondly, high level attitudes appear not only positive, but also stable. This means that this positivity is not new, nor is it fragile. In 2017, 76% of people said that prejudice against transgender people was ‘always or mostly wrong’, compared to 76% in 2019 – so this has stayed consistent. While the proportion of people who describe themselves as ‘not prejudiced at all’ against trans people has risen, to 84% now, compared with 82% in 2016.

The proportion of people who describe themselves as ‘not prejudiced at all’ against trans people has risen.

Encouragingly, these positive attitudes hold up pretty well in real-life scenarios. The vast majority (84%) of people think properly qualified trans people should be able to work as police officers, and three quarters of us (75%) think trans people should be able to teach our children in school. This matters: these are the professions that the public sees as important and trustworthy, so accepting trans people into these roles is a great indicator of social acceptance.

However, there is some more concerning data, which suggests that in some areas, the public have become a little *less inclusive in recent years. While most of us, particularly women, continue to be comfortable with trans women using single-sex spaces like toilets and domestic abuse refuges, the data shows us a worrying downward trend.

The biggest change is in attitudes to trans women in refuges, where now just 51% of the population are comfortable (compared to 61% in 2016) and 24% are uncomfortable (compared to 16% in 2016). Contrary to common anti-trans narratives, these views are not driven by fear - only 1% of women are scared of trans people. So what we’re seeing is that the incessant and largely negative media coverage on these issues is likely starting to negatively impact and influence people’s attitudes.

So we know that a very small percentage of people fear trans people. But other than fear, how do the public feel about trans people? 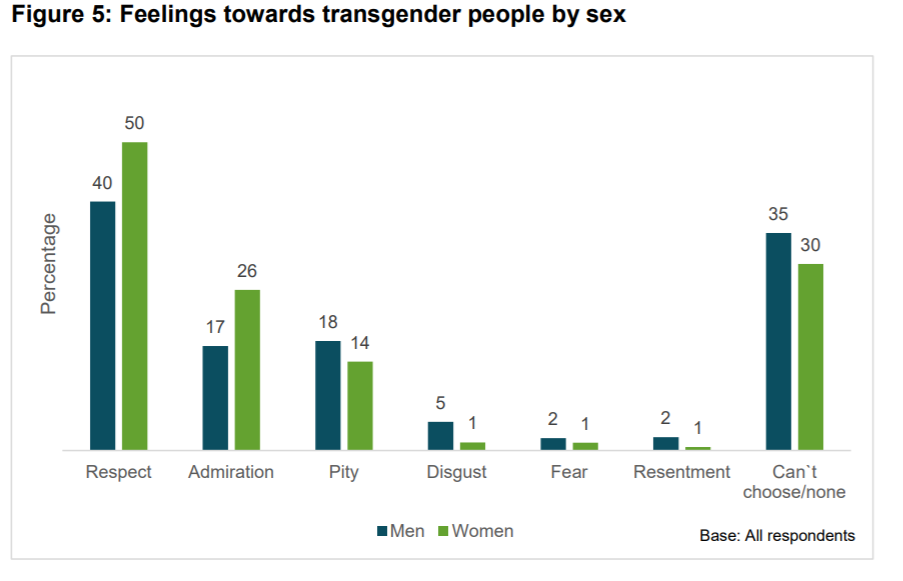 When the public is asked to choose words that describe their *feelings towards trans people, we see a really striking picture.

Overall, positive feelings dominate, particularly for women – half of us feel ‘respect’ and more than a quarter ‘admiration’ for trans people. We can also see that women are much more likely to feel respect and admiration for trans people, while also being less likely to feel disgust, pity, fear or resentment. This is important to bear in mind, as it undermines the common narrative which seeks to turns cis women and trans women against each other.

Very few people indeed selected negative feelings such as disgust, fear or resentment. But when we look at the views of the minority who describe themselves as prejudiced (16% of us), this transphobic minority feels very strongly: a third said they felt disgust (33%) and one-quarter said that they felt resentment (25%). This means that while the group of people who are transphobic, and would describe themselves as such isn’t large – 16% is in line with other forms of discriminatory attitudes to oppressed groups – the views of that minority are much stronger.

What does this all mean?

Firstly, this data demonstrates *yet again* that the public ‘debate’ on trans rights and trans lives is not in line with public attitudes. The British public in general, and British women in particular, feel pretty positive about trans people. If our media coverage and social media discussions simply reflected this reality, the lives of trans people would be immeasurably improved overnight. Instead of this, the drip, drip of negative and distorted media coverage may be manufacturing a creeping sense of discomfort around shared spaces.

And secondly, it shows that we have a small, but vocal group of people with extreme anti-trans views in Britain, and that should worry us all.

The Government Equalities Office estimates that there are between 200,000 and 500,000 trans people in the UK, in a population of more than 66 million. We need to make sure our trans family, friends and neighbours feel safe and welcome, and we need to hold family and community members, leaders and journalists to account for how they engage with the trans community.

If the majority of us simply sit by while the transphobic minority shout their harmful views from the rooftops, our warm feelings mean nothing, and we are part of a problem that is ruining trans folks lives.

If you see people sharing misinformation about trans people, challenge it.

‘We need, in every community, a group of angelic troublemakers’ – Bayard Rustin