This Trans Visibility Day we’re shining a light on five fights for trans equality. In this article you will hear from trans individuals and organisations about their experiences, their resistance to transphobia and their vision for trans equality.

Please note that this article talks about transphobia, transphobia and racism in healthcare, the impact of transphobia on young trans people and conversion therapy.

In the last few years, we have seen attacks on trans rights in government, the media and on the streets. But trans people and their allies have been fighting for a long time and will continue to build strong communities and speak up against transphobia.

1. The fight to simply be ourselves!

Tara, one of Stonewall’s Trans Staff Network co-chairs shared that "most trans people have fought hard to live as their authentic selves. The world has a long way to go to ensure trans people are treated equally in society, from protecting us by law to ending transphobia in our day to day lives. Cisgender people do not have to fight to be accepted in this way.

Despite the challenges, however, trans people can and do prosper. Trans people live full and happy lives. People fight for what holds value to them, and nothing is more valuable than the right to define who you are, and to be treated equitably not despite it but because of it.”

2. The fight for trans Black, Asian and Minority Ethnic and People of Colour’s (BAME/PoC) access to support.

Inequalities that already existed have ramped up during the Coronavirus pandemic for the most marginalised LGBT+ people. In an article from BAME/PoC working at Stonewall, 15 things LGBTQ people of colour want you to know it says: ‘Appropriate therapy is also difficult to find. This is particularly worrying when LGBT+ people are at a higher risk of experiencing common mental health problems than the general population. For instance, 52 per cent of LGBT+ people experienced depression in the last year, increasing to 62 per cent of BAME LGBT+ people. QTIPOC experience a lack of support from the predominantly white staff of health professionals, who aren't only guilty of racist and heteronormative microaggressions, but simply fail to understand or be sensitive to the specific needs of QTIPOC.’

Groups and organisations like the Black Trans Foundation, have provided essential support to Black trans people throughout the Coronavirus pandemic. They are a Black trans-led non-profit organisation offering free four-month courses of therapy to Black trans and non-binary people aged 16+.

If you can, donate to Black Trans Free Therapy fund and follow their page on Instagram. You can find support from QTIPOC organisations here.

3. The fight for trans-inclusive education.

Koda (he/him) is a young, working class LGBT+ person speaking up about bullying in schools. He spoke to us about how important it is that young people within the LGBT+ community are informed and supported through inclusive relationships and sex education and across the curriculum. Read his full story.

He shared, ‘I always felt like the school was told to keep our [trans people’s] existence on the down low. Even a simplified explanation of the LGBT+ community, just “we’ll accept you and help you”, could bring down suicide rates for young trans people…I just want people like you- yes, you who’s reading this- to feel safe being who you are.’

We have much more to do, to protect and support young trans people. Find out more about Stonewall’s LGBT+ inclusive Relationships and Sex Education campaign. Read and share Koda’s message of inclusion, acceptance, and safety for all LGBT+ young people.

A TRANSforming Futures report on trans people’s experiences of healthcare details many problems faced by trans people in healthcare and highlights participants’ proposed solutions. Nim Ralph, an activist and community expert said, ‘at best you’re being misgendered, but at worst people don’t know how to engage with your body.’

Even accessing support from a GP for general or trans-specific healthcare can be a challenge. One participant in the trans people of colour workshop said, ‘you have to think 20 steps ahead, which creates anxiety. You have to police yourself in how you present information, and minimise your feelings.’

Everyone should feel safe and supported when accessing healthcare and be able to trust they will be heard. Read the full report.

5. The fight to be protected against conversion therapy.

The campaign to Ban Conversion Therapy is working. Recently, Liz Truss committed to ending medical, psychiatric, psychological, religious, cultural or any other interventions that seek to erase, repress or change the sexual orientation and/or gender identity of a person.

You can help secure a full, legislative ban which includes the protection of trans people against conversion therapy by writing to your MP.

The fight for trans equality continues, and it will take all of us to secure a better future for trans communities. You can find support from LGBT+ inclusive organisations here.

The data is clear: most people are supportive of trans rights 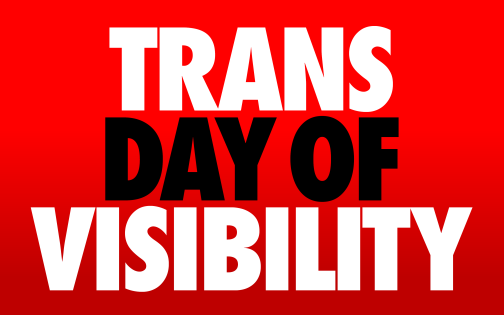