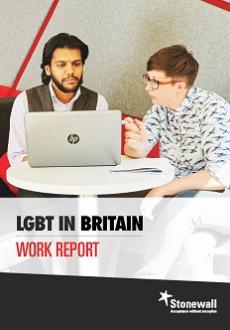 My employer is generally very supportive but doesn’t have a specific LGBT discrimination section in their policies and procedures should discrimination occur. So, if discrimination or harassment does occur – and it does – then they don’t effectively handle things and the LGBT person is blamed for causing problems and being over sensitive.’

Mollie, 51 (Yorkshire and the Humber)

I have not come out to anyone where I currently live or work. I would not feel comfortable or safe coming out to any of my colleagues and have felt reluctant to make friends where I live now in case they find out about my trans history.’

While serving a customer at work I corrected them on pronouns and they laughed in my face and asked me if I had a penis and told me I was wrong. My supervisor witnessed the whole thing and told me not to be so dramatic about it.

My office is using the word ‘gay’ as an insult or a slang term. I feel their ignorance regarding bisexual people will be worse. If these particular individuals didn’t work in my office anymore I’d feel comfortable being out in the workplace.’

Find out about Stonewall's workplace programmes, events and more