LGBT in Britain - Universities Report is based on YouGov research with 522 LGBT university students reveals that LGBT students face concerning levels of discrimination in British universities. 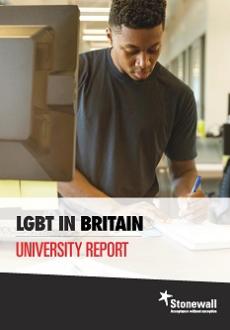 I was walking to the university library when a group of people started yelling things like “oh look at this dyke”, “you look like a man… wait, is that the point, you tranny?” at me as I walked past.

I went to a Christian event at university and it was heavily implied that they thought being LGBT+ was sinful and wrong.

The university email system will not use my preferred name unless I change it by deed poll, an option currently unavailable to me for complex reasons, and so I am forced to see my dead name attached to every email and computer document I produce, even on my own software

In the university, people have refused to refer to me with the proper pronouns because they “don’t see me as a woman” despite me fully presenting myself as such. I have not worn a dress once for the last couple months due to the weather and as such I have been seen as “not trans enough”. I have been told that I’m undermining the image of women by a number of students and it has caused me to feel unable to socialise with my peers.

My university has made great leaps and bounds in welcoming all students. One facet that greatly pleased me was the introduction of gender neutral bathrooms.

Find out about Stonewall's workplace programmes, events and more