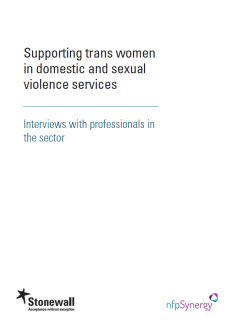 A report looking at the experiences of professionals delivering support to trans women in domestic and sexual violence services.

The qualitative research, conducted by nfpSynergy, is based on in-depth interviews with representatives from 15 organisations across England, Scotland and Wales.

​The report was commissioned by Stonewall, in response to the intense media attention focused on inclusion of trans women in single-sex services.

Much of this reporting was sparked by the UK Government’s announcement that it would reform the Gender Recognition Act (2004).

The voices of the service providers have been largely missing from this coverage.

This research was commissioned to better understand the experiences of professionals in the field and to hear their views and approach on trans inclusion.

Representatives from the three main political parties have written forewords for this research and fully endorse the effort to gain greater evidence.

The Rt Hon Maria Miller MP (Conservative), Chair of the Women and Equalities Select Committee said: ‘In 2016, I was proud to lead the Women and Equalities Select Committee’s inquiry into transgender equality. Alongside fundamental changes within our healthcare, education and criminal justice systems, we concluded that reform of the Gender Recognition Act 2004 is urgently needed.

‘But while there is cross-party support for trans equality, misinformation is holding back progress.

‘That’s why Stonewall and nfpSynergy’s report is so important. It provides a clear, balanced account of the provision of women-only services to trans survivors. It shows us that many services already support trans women on the basis of self-identification; streamlining the legal system of gender recognition will not have an impact on the way they are able to operate.

‘As the public consultation progresses, I hope that reports such as this will be used to inform an evidence-based conversation, where everyone can be heard and treated with dignity and respect.’

Labour MP Jess Phillips said: ‘We need to remember that it is trans people who will benefit from the reform of the Gender Recognition Act. Of course, there needs to be discussion and that needs to be conducted in a way that is considered and civil. The public conversation has been the exact opposite.

‘Stonewall and nfpSynergy’s report shows why it’s so important that we hear from women’s refuges and rape crisis centres, who assess the needs of the vulnerable women in their care day in, day out. In this report, they’ve shared their experiences of supporting trans women. And they talk about the ways in which all survivors need personalised support.

‘I hope that, throughout the consultation process, we continue to listen to each other and place our trust in the experts.’

Baroness Burt of Solihull, Liberal Democrat Spokesperson for Women, said: ‘The Gender Recognition Act is in urgent need of reform. The changes we want to see introduced will simply make it easier for trans people to have their gender legally recognised. But we’ve seen a wave of attacks from a vocal minority in the media and online portraying these proposed changes as a threat. One often cited fear is what will happen to domestic and sexual violence services.

‘This report shines a light on the experiences of professionals whose voices have been largely missing. Opponents of reform portray scenarios that are very different from reality. It is therefore crucial we listen to services providers and hear about what is actually happening. It’s clear that their efforts to progress trans inclusion are an integral part of their work to make their services inclusive for all women.

‘Through working collaboratively, we can end this damaging speculation, and focus on building a society where all marginalised women are treated with dignity and respect.’

Find out more about the Gender Recognition Act.

A Vision for Change