LGBT in Britain - Health Report is Stonewall's report based on YouGov research with 5000 lesbian, gay, bi and trans (LGBT) people across England, Scotland and Wales about their life in Britain today. This report, part of a series based on the research, looks at mental health and well-being of LGBT people and investigates the specific experiences of LGBT people when accessing healthcare services.

This study shows the rates of depression, anxiety and other mental health conditions among LGBT people. It also looks into the accessibility of healthcare services and discrimination LGBT people face when seeking medical support. 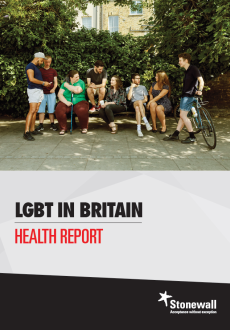 I got sectioned after a suicide attempt and the nurse said that my mental health problems were due to allowing Satan in my soul. If I just accepted my true gender then God could forgive me.

I am being treated for depression, which is caused in part by not being able to access any LGBT senior age-related groups within 80 miles of me. I would be actively involved in such a group if I could find one, but there is nothing. I feel very isolated.

For support on any issues raised by this report, contact: