Based on YouGov polling of over 5000 LGBT people, the research reveals that anti-LGBT abuse extends far beyond acts of hate and violence on our streets. Many LGBT people still endure poor treatment while using public services and going about their lives, whether in their local shop, gym, school or place of worship. 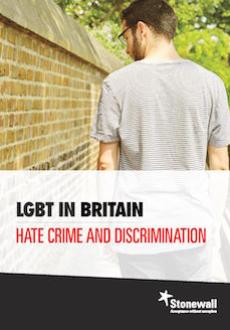 I had one incident where girls did not want to enter the bathroom stall I had used despite a large queue, like as if I was infected. Straight people don't know how privileged they are to not have their love questioned, or to have romantic days out and not think about who is around you or how safe you are.

I was assaulted by a man whilst I was holding hands with my lesbian partner. He grabbed me from behind and thrust himself into me, then verbally attacked me.

I had occasion to report that I had been harassed and suffered an injury. I talked, they listened, but it was their attitude and I got the impression that it was not being taken seriously.

Stonewall has made the following recommendations for all individuals who want to help tackle anti-LGBT hate crime and discrimination:

What is hate crime?

How to complain about the police

How to report hate crime: 10 reasons why you really should