Read our top tips on making sure all LGBTQ+ people feel welcomed in sport.

Being an inclusive sports organisation

Regardless of the set-up of your sport or activity, everyone will benefit if it’s more inclusive of lesbian, gay, bi, trans, queer, questioning and ace (LGBTQ+) people.

For a lot of people, sport and sporting environments are ‘safe spaces’, somewhere they feel comfortable and at ease. But for others, the same place might make them feel like they have to hide part of their lives because of how others might react.

Follow these top tips to create a space where everyone feels they can be their authentic self. This way, they can spend all their energy and enthusiasm on their sport.

Sporting environments should be inclusive of all LGBTQ+ people, so make sure every opportunity is as open to all as possible. Check that your organisation has inclusion policies and that they are up to date. Ensure you have a policy on homophobic, biphobic, and transphobic bullying. Check your policies for gendered language as it excludes people. Make sure you have Trans Inclusion guidelines and policies from your governing body and that you’re confident applying these.

Draft and actively enforce codes of conduct so that everyone at the organisation knows what’s acceptable behaviour and what isn’t. Include your organisation’s core values and references to your inclusion and anti-bullying policies. Put the code of conduct on prominent display – in person or online – as a permanent reminder.

Some people may prefer to play in mixed-gender environments, so set up mixed trainings, sessions, or tournaments. If your organisation is already inclusive of all genders, make this clear by renaming your session to explicitly say ‘mixed’. Mixed activity breaks down barriers of opportunity between traditional ‘men’s’ and ‘women’s’ categories and can provide comfortable and inclusive opportunities for everyone.

Consider what could be done to your facilities to make them more inclusive, such as introducing gender-neutral changing rooms. If you use third-party facilities, work with the managers to ensure gender-neutral spaces are available.

Being inclusive isn’t just the right thing to do – it has real benefits for you, your teammates, and your club. Inclusivity:

Being an inclusive teammate

Every team member plays a huge role in making people feel part of the team. Team talks, end of season speeches, WhatsApp groups and dressing room chatter – take these steps to ensure everyone can give their all to the club and make the best of themselves.

Avoid using language that makes assumptions about people’s gender identity and the gender of their partner. It’s far more inclusive to say things like ‘bring your partner to the game’ rather than ‘boyfriend or ‘girlfriend’, and celebrate a ‘player of the match’ instead of ‘man’ or ‘woman’.

If language focuses on someone’s identity in a negative way, it’s hurtful and abusive, even if it’s not directed at anyone around you at the time. This isn’t banter; it’s abuse. Slurs cause harm even if there’s no obvious ‘target’. LGBTQ+ people don’t need to hear the words to be hurt by them. They reinforce stereotypes, build barriers to understanding and stop the sporting arena being a welcoming place. If you feel safe to do so, challenge abusive language and behaviours. Remind people that this language is offensive and exclusionary.

LGBTQ+ is an umbrella term but the experiences of the people it covers can be very different, both in sport and in the wider world. Support everyone as the individuals they are. Talk to everyone about wellbeing and valuing team spirit, and be sensitive to differences in experience.

Talk to LGBTQ+ people on your team about how they want to be supported and championed. Small actions can go a long way, and there may be things they need that are specific to your environment and/or their own personal experiences. Teammates look out for each other, so make a habit of checking in with all of yours!

Stonewall is launching bespoke Empowerment sessions for people involved in sport. These sessions will cover how to create inclusive environments, step up as an active ally, and challenge homophobia, biphobia and transphobia. Register your interest in participating in a future Sport Empowerment Programme. 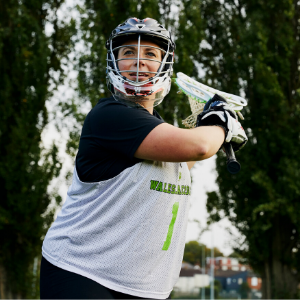 I’ve been very lucky to find a home in the friendship of team sport. In a world which is still very much not a safe space for queer people, lacrosse has given me a safe environment where I can express myself physically and support my friends in a common goal.

The first people I came out to were teammates. They supported me the same way we supported each other on the pitch: with loyalty and laughter. When I couldn't find family elsewhere, my lacrosse family stepped in.

I firmly believe such benefits should be available to everyone, and I love that Rainbow Laces visibly works to make sport a truly positive force for people.

Being a respectful fan

Supporters of professional/elite teams and athletes

As fans, we all want the same thing: winning teams and athletes that perform well. All clubs and sports have an ethos and values, and showing your support for a team or sport shouldn’t go against this. We can all cheer our side on and create an exciting atmosphere without being abusive.

Although more people think homophobic, biphobic and transphobic abuse is wrong – and more people recognise it when it happens – too few of them report it. Such abuse can only be stamped out if the authorities know when and where it’s happening, so everyone should call it out whenever they witness or experience it.

Keep in mind that abusive language doesn’t need to be directed at LGBTQ+ people for it to be a problem. Chants which reference sexual acts, slurs, and misgendering are all forms of abuse – even if you don’t think an LGBTQ+ person will be directly affected. Abuse can also take the form of graffiti, stickers, or purposefully excluding someone from social activities.