Prides for All:KeshetUK
Donate
Log in
Home
Prides For All: KeshetUK
What you can do
By
Angela Bryan-Brown, Campaigns Officer

Over the summer, Stonewall will platform LGBT groups and Pride organisers to share what Pride means to them. Here is Neil Leviton of KeshetUK.

Previously in this series: Prides For All: Birmingham's Finding a Voice

Not all views are shared by Stonewall. To learn more about the project e-mail pride@stonewall.org.uk.

KeshetUK exists to build a world where no Jewish LGBT+ person has to choose between their LGBT+ and Jewish identites.

We work with the community including synagogues, schools, youth organisations, universities and communal organisations to ensure that the Jewish community is fully inclusive for all LGBT+ people and their families.

What does Pride mean for you personally?

I grew up in the 1990s and went to a Jewish day school. As a Jewish gay person I felt very isolated. When I was 17 years old, a friend of mine (who is an ally) said that he would go with me to Pride, and this was the first time I met other LGBT+ Jews.

For me, Pride is about connection, activism and celebration.

How did KeshetUK get involved in your local Pride?

KeshetUK started marching at Pride in London a few years ago.

We are hoping to have the biggest ever group this year.

We help coordinate the Jewish groups that march – which include organisations representing LGBT+ parents and parents of LGBT+ children, synagogues, and Jewish LGBT+ social groups, allies and other supporters. Our numbers of march participants have grown steadily over the last few years - we are hoping to have the biggest ever group this year.

There are many reasons that individuals march but one important reason is to have that visibility. You can be both Jewish and LGBT+ or Jewish and an ally of the LGBT+ community, and be proud.

What have you learnt?

It's important for faith groups to come together and show that people can both be LGBT+ and religious.

What changes have you seen in the way Prides have been run since you have been involved?

Pride in London has attempted to manage the need to grow sustainably and the needs of a diverse LGBT+ community.

There has been an increased effort to engage faith communities which is positive.

There has been an increased effort to engage faith communities which is positive.

What does it feel like not to be included?

Jewish LGBT+ people often feel like we don’t quite fit into either the Jewish community or the wider LGBT+ community (which has not always welcomed expressions of faith or religious culture/heritage). This can lead to a feeling of isolation and disconnection.

In relation to Pride, one important barrier Jewish LGBT+ people and allies face is that many events are held on a Friday evening and Saturday which is Shabbat.

This means that Jewish people who are Shomrei Shabbat (they observe Shabbat in such a way where driving and spending money are not allowed) and don’t live close to the start of the march (or aren't able to stay nearby) cannot participate.

As the London Jewish communities generally live far from central London, this contributes towards the invisibility of people from mainstream Jewish life.

Initially, it means feeling genuinely listened to and understood. We believe that all Pride events should accommodate as many people as possible and we acknowledge that progress has been made in relation to people of faith.

This relationship we're developing with Pride feels empowering and reassuring.

Pride in London this year has been great at understanding the specific needs of the Jewish community, for example, making sure that briefings aren’t all on Friday nights. This relationship we're developing with Pride feels empowering and reassuring. In the past, Pride has also supported us with accommodating people arriving late for the start of the parade because they had been attending synagogue in the morning.

What innovations or changes would you like to see?

Ensure that Pride events are on multiple days, so those who can’t participate in the parade for faith reasons can still attend events and feel part of the community. It would help to have a calendar with the major holidays of faiths in the UK so that plans can be made to accommodate people of faith who observe special days.

What is your single message for Pride organisers?

Religions such as Judaism can be expressed and understood in many ways – a faith, a community, a culture, an ethnicity – and including LGBT+ people of faith will mean you'll have to take many different considerations into account.

We are experts in our own inclusion.

The best way to do this is to engage with minority groups within the LGBT+ community, as we are experts in our own inclusion.

There are some basic steps that can mean you won’t be actively excluding a group of people who'd love to be involved and add to the beauty of the LGBT+ community.

Founded in 2011, KeshetUK has become the sole organisation working across the Jewish community to deliver training to promote the inclusion of LGBT+ people in all areas of Jewish life in the United Kingdom. Visit their website to get involved.

Prides For All: Finding a Voice 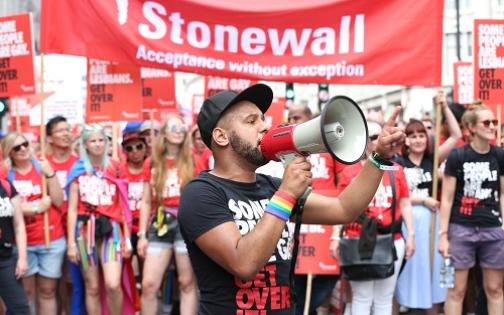 Come Out For LGBT: Why Pride events can mean so much