Over the summer, Stonewall will platform LGBT groups and Pride organisers to share what Pride means to them. First in this series is Khakan Qureshi of Birmingham's Finding a Voice.

Not all views are necessarily Stonewall's. To learn more about the project e-mail Pride@stonewall.org.uk.

Tell us about Finding A Voice

We are a multi-faith voluntary-led social and support group for South Asian people who identify as LGBTQI+.

Finding A Voice offers a safe space to share stories, reduce social isolation and engage in meaningful discussion about what it means to be South Asian and LGBTQI+.

We are a predominantly South Asian LGBT+ group and inclusive of others. We discuss tackling homophobia and raise awareness and representation of South Asian LGBTQI+ individuals within the South Asian diaspora and wider community.

What does Pride mean to you personally?

The first Birmingham Pride I attended was in 1997.

It was affirmative action and a way to celebrate the LGBT+ community.

Pride, to me, was initially a socio-political statement. It was affirmative action and a way to celebrate the LGBT+ community. I appreciated the freedom it offered to many who were isolated and unable to express themselves in a society which was and is oppressive.

What has changed about Pride for you over the years?

Somewhere we seem to have lost the meaning as to why we have Pride in the first place. I’ve observed it to be dominated mainly by white, gay men and have felt that what was on offer hasn’t always been as inclusive or diverse as one would hope.

It’s changed from a predominantly LGBT+ event to include more commercial ventures. Those who want to make a stand against LGBT-phobia and discrimination are being forced out.

I understand there may be LGBT+ networks within large companies, but there isn’t anything to entice smaller, independent groups working tirelessly to reduce prejudice and stigma.

It’s a fun day for all, but we seem to have lost the message about diversity, inclusion and equality for all.

When did Finding A Voice first start taking part in Pride?

As a group, we first became involved in Birmingham Pride in 2015. We discussed the safety aspects and whether or not people felt comfortable being in the public eye. We shared concerns about media presence and social media photos.

Our participation almost didn’t happen, but after careful consideration, the group agreed.

I was overjoyed when the organisers said, yes, we could march.

I was overjoyed when the organisers said, yes, we could march.

We participated in the parade to make a stand, raise visibility of the ‘gaysian’ community and to show solidarity. It was a historic moment: the first time in Birmingham that South Asian LGBT+ individuals came together as a large group and were visible.

We have participated in the Birmingham parade every year since. Last year, 100 'gaysians’ descended on Pride in London - an electrifying and memorable experience in itself.

Have there been times where you did not feel included? What was this like?

Finding A Voice is a small community group and does not receive any funds. We have not succeeded in getting complimentary tickets, although pubs and larger organisations do.

Pride does not represent the diversity within our multicultural society.

Pride does not represent the diversity within our multicultural society. We pride ourselves on being multicultural but, within the event itself, it lacks authenticity.

I don’t see many BAME LGBT stars entertaining or speaking to the crowd. Surely not all BAME LGBT+ people are hidden or closeted?

I appreciate the opportunity to walk with a group of like-minded individuals in the Pride parade. It allows us to be seen and heard, provides unity and camaraderie.

For someone from a BAME background, to be able to express yourself with others who identify with you culturally and racially inspires confidence.

I have been overwhelmed by the support given by the spectators. Having visible role models is inspiring and can reassure people who feel alone in their struggles to come to terms with who they are.

What would you like to see at Prides in the future?

More authentic South Asian performers on the main stage; bhangra or Bollywood beats included in the playlist; a varied array of foods (vegetarians, halal, Caribbean) to cater for the dietary requirements and diversity of the community; more representation of BAME LGBT+ people in promotional material.

And more contact with grassroots activists and groups which advocate on behalf of those who are unable to speak up due to religious, familial or cultural pressures.

I think the social media presence of Pride could invite BAME LGBT+ people to share their experiences of the event.

Advertising the event in non-white media platforms, possibly in various languages, might also help to reduce the discriminatory attitudes often experienced by those in a ‘minority within the minority’.

Pride organisers could consult BAME LGBT+ individuals about what they want to see and do at the event.

Let our voices be heard and be more rainbow, not whitewash

We’re the rainbow-coloured A-Z of the sexual spectrum. Let’s remember Pride was about everyone who did not have a voice, but were compelled to make their voices heard.

So please, let our voices be heard and be more rainbow, not whitewash. Pride is about unity in the community. Let us all be proud of who we are! 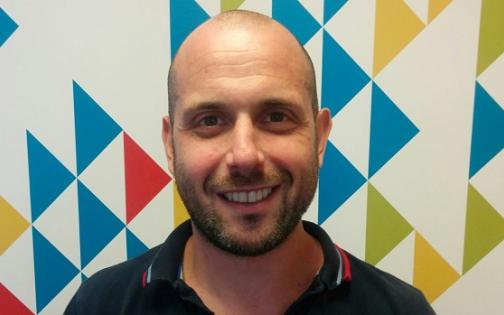 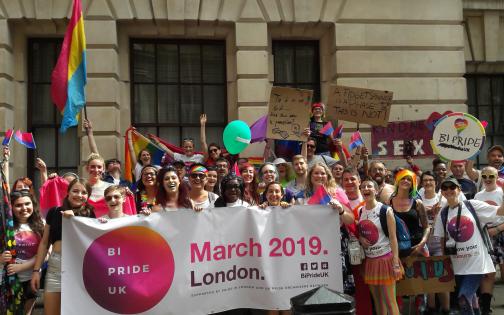 Prides For All: Bi Pride 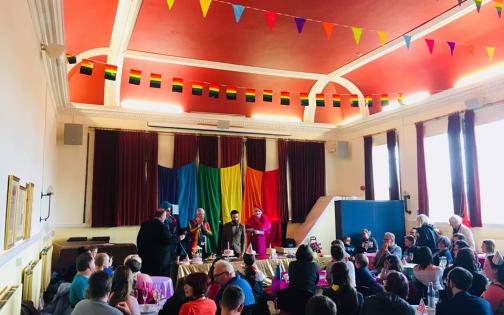 Prides For All: Midsomer Norton