As a passionate cricket fan I’m excited to see the England and Wales Cricket Board and county clubs show their support for LGBT players and fans this weekend.

Since transitioning I have not been involved in cricket. I am nervous of how I might be treated. Out LGBT people in cricket are very rare.

I hope that the Rainbow Laces campaign will help change this.

I would love to do more to support my local women’s cricket team, Western Storm, and help get more women and girls involved in cricket.

Since transitioning I have not been involved in cricket

I’ve been a sports fan nearly my whole life. My mum and dad used to go to rugby and cricket matches on dates.

Dad was quite good at sport in his youth, but I took more after my mum, being completely hapless at anything requiring physical coordination.

I therefore grew up to be a keen spectator. Being a trans girl in the 1970s meant staying firmly in the closet. Had I come out I might have ended up in an asylum.

But other kids at school sensed that I was different, and my lack of sporting ability was one thing that made me suspect.

Cricket was a major part of my escape.

I was a big fan of Test Match Special. On that show was a man called Bill Frindall, who was a key part of the team simply because he was good with numbers and keeping records.

That I could do. I taught myself scoring, not just in the standard book, but using the more sophisticated method that Frindall favoured.

I was good at it, and soon found myself a valued part of the school 1st XI, then the town 1st XI, and finally my university 1st XI.

As the team scorer I could occupy both male and female space. I was not a player, and therefore not “one of the boys”.

I was still having to pass as male, but I spent much of my time hanging out with the wives and girlfriends who came along to the games.

Often the other team’s scorer would be one of the WAGs. This suited me perfectly as it allowed me to exist in female society. I was almost “one of the girls”. As a kid I dreamed of having Bill Frindall’s job when I grew up.

It seemed an idyllic existence, going around the world watching cricket matches. He was a long way from retirement when I graduated from university, so I had to find a different career.

Cricket was a major part of my escape.

The closest I got to my dream job was doing commentary for a local hospital radio service.

Sophie Cook has done amazing things for trans visibility in sport, thanks in no small part to the support of AFC Bournemouth.

To have visible support at every T20 Blast and Super League match means LGBT people in cricket will feel more comfortable being themselves in the game.

Please show your support from 10-13 August and share Stonewall and ECB's #RainbowLaces posts on social media. 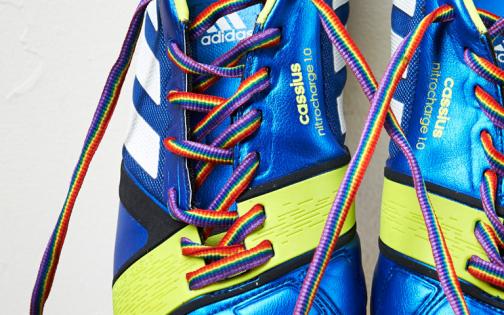 Role Models have a responsibility to make sport rainbow