In a joint report, Stonewall, the leading charity for lesbian, gay, bi and trans equality, and the UK Lesbian and Gay Immigration Group (UKLGIG), have investigated the experiences of those who have been forced to seek asylum due to persecution for their sexual orientation or gender identity.

Researchers from both organisations conducted 22 in-depth interviews with LGBT asylum seekers who have been held in UK detention centres. They were asked about their experiences with staff, other detainees, their physical and emotional well-being in detention and access to legal and health services.

Findings show that staff are ill-equipped to meet the needs of LGBT people or to protect them from harassment from fellow detainees. The LGBT asylum seekers who were interviewed say they felt forced to hide their identity, for fear of abuse.  Detainees who were known to be LGBT were bullied, harassed or physically attacked by other detainees, and victims said they did not feel protected by detention staff.

Many countries – 73 United Nations member states – criminalise consensual acts between adults of the same sex, and very few countries recognise trans people’s rights. Interviewees who took part in the research have faced severe discrimination and violence in their country of origin, leading them to claim asylum.

A Ugandan asylum seeker: ‘It felt like I was betrayed because if somebody seeks asylum, they’re just trying to get some protection, but then you’re detaining them. It’s like you’re putting them in prison for having come to you for help. It didn’t make sense to me.’

Interviewees reported being denied access to medication, such as anti-depressants and HIV-drugs. Many of the LGBT asylum seekers have also suffered rape and torture in their country of origin, yet they are still detained, despite the Home Office agreeing that people who have suffered such abuse should not be placed in detention.

‘Without doubt, the way the asylum system deals with people who are persecuted for their sexual orientation and gender identity has improved since we released our 2010 report, No Going Back.  Yet there is still significant work for the Home Office to do to improve the lives and experiences of LGBT people, and to improve conditions in detention centres in general.

‘To create this report we had to rely on the bravery of individuals who were willing to speak out and we are eternally grateful to them. They have shown true courage in sharing with us what are clearly upsetting memories and experiences in the hope that it will create change.

'At Stonewall we’re working with international activists to help fight for equality in their countries so that people aren’t rejected from their families, or unwelcome in their own communities. But before this happens, people will continue to be victims of discrimination and will continue to seek sanctuary. We must ensure that those who come to us looking for help are accepted for who they are, and that we are helping them to live happy and free lives.’

Paul Dillane, Executive Director at UKLGIG, said: ‘Our research finds that LGBT asylum seekers are particularly vulnerable in immigration detention and face significant disadvantages and dangers. In detention they experience discrimination, harassment and violence from other detainees and from members of staff. The detention environment has serious long-term effects on their mental and physical well-being.

‘Seeking asylum is not a crime, it is a right enshrined in the Universal Declaration of Human Rights and yet over the past 20 years the scale of immigration detention in the UK has expanded rapidly. Until last year the UK was alone in Europe in operating the Detained Fast Track, a large-scale detained process where asylum claims were determined on a highly accelerated basis in a matter of days.

'The UK has one of the largest detention estates in Europe and detains more migrants and asylum seekers than the vast majority of other countries. Shockingly, it is alone in detaining them indefinitely. In July 2015, the High Court found that the process was ‘systemically unfair and unlawful’. However, the UK Government has consistently stated its intention to introduce a new detained procedure.

‘The UK is a country that proudly seeks to promote human rights including those of LGBT people on the world stage yet it has for too long detained those who flee to our shores in search of sanctuary. In order to ensure LGBT refugees are respected and protected, the use of indefinite immigration detention must end.’

The research No Safe Refuge was made possible by support from the law firm Baker & McKenzie. 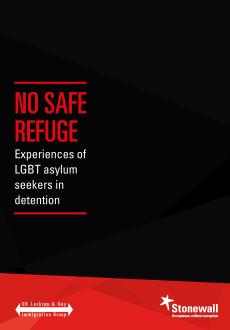 The latest straight in your inboxSign up for news