Last week a trans woman of colour was murdered in London.

Naomi Hersi, just 36, was found with knife injuries in Hounslow last Sunday. She died at the scene. This horrible crime, and the way that many sections of the media have reported it, brings to light a series of deeply troubling issues about how our society views trans people – and particularly trans women of colour.

The way that many sections of the media have reported it brings to light a series of deeply troubling issues about how our society views trans people – and particularly trans women of colour.

Trans people currently face epidemic levels of discrimination and for some, this means that they feel unsafe to go about their daily lives.

Two in five trans people (41 per cent) have experienced a hate crime or incident because of their gender identity in the last 12 months.

Trans people experience abuse in places that many would presume were safe, such as at work: our research shows that one in eight trans employees (12 per cent) have been physically attacked by a colleague or customer in the last year.

Reporting of hate crime against trans people is also woefully low, and for understandable reasons. Most trans people – four in five (79 per cent) – don’t report hate crimes to the police. Some trans people don’t feel supported by the police and some experience even further discrimination if they do report a crime.

As Angus, 24 from Scotland, told us: ‘I was raped. Police kept referring to me as ‘she’ and female’ and using my birth name. The doctor they brought to examine me, made me uncomfortable and continued to call me female.’

This is the context that surrounds Naomi’s death – a situation that we all need to recognise needs urgent action from politicians, institutions and individuals.

The media’s role in changing this culture needs to be a key one. How the media treat hate crimes and violence against trans people is no doubt a contributing factor to how willing trans people are to talk about the violence they face.

But the murder of trans people often receives little coverage. If the victim is black, or from another ethnic minority group, their death is also less likely to be reported by mainstream titles.

Where the media do write about trans people affected by violence, the depressing truth is that the coverage is likely to be harmful and offensive.

Where the media do write about trans people affected by violence, the depressing truth is that the coverage is likely to be harmful and offensive.

The way the media have covered Naomi Hersi’s death encapsulates all these issues.

Her death was reported three days after the incident. It was only picked up by a small number of the mainstream press titles. Some of the media reports talked about her death in the context of other knife violence in London, with all the other victims discussed being men – ignoring the specific issues that are likely to have contributed to the attack on Naomi.

Much of the reporting of her tragic death not only referred to her by the wrong name, it repeatedly misgendered her. One report didn’t misgender: they just didn’t gender her at all. Throughout the report they referred to her as ‘the victim’ or ‘the 36-year-old’. It was a completely dehumanising account of a woman who neighbours described as ‘lovely fun person’.

From what we’ve seen, the only title to actually cover Naomi’s death in a dignified way was Pink News, an LGBT title and an increasingly fierce advocate for trans equality.

If this sad case shows anything, it’s that - now more than ever – there is a need for us to form coalitions that are prepared to Come Out For Trans Equality and advocate respect and dignity in how we talk about trans issues.

We need people from every sector of society to show their support for trans equality and to join the fight for acceptance without exception for all trans people.

If you’ve seen something offensive in the media about trans people, you can report it to Ipso. They’ve written specifically about how you can act to help improve media representation. 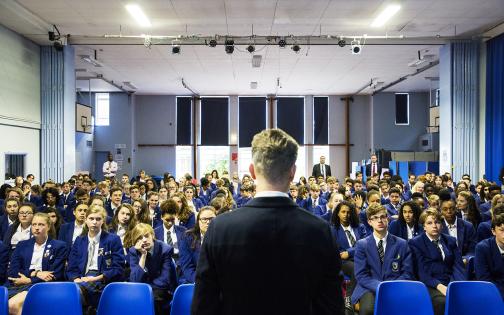 We need more organisations to come out for trans equality