Rainbow Laces is Stonewall’s campaign to make sure all LGBT people have a good experience in sport.

The campaign was launched in 2013, and Stonewall has run it with the support of TeamPride since 2016. As director of sport, I’m often asked: do we still need the campaign?

Thanks to so many committed LGBT people and allies across sport we have seen a huge amount of progress over the years. We can now say:

This is incredible progress. But there is so much more we need to do together before all LGBT people can have a good experience in sport.

Our research finds that 4 in 10 LGBT people still don’t think sport events are welcoming places for people like them. And 1 in 10 LGBT people (including almost 3 in 10 trans people) have been discriminated against in a sport or fitness setting.

That’s not good enough. Sport brings so many benefits, whether it’s the community of being part of a sports club or team, joining in with your family’s fanatical support for the same football team, or the physical and mental benefits of keeping active for those who can. LGBT people should have every chance of experiencing sport to its full.

We all need to play our part. Rainbow Laces is an opportunity to inspire new allies to join us, share why we care, highlighting that LGBT people are part of the sport community and always have been.

We’re asking everyone to Come Out Active.

That’s why we’re asking everyone to Come Out Active – it’s a simple way of opening up the conversation. All you have to do is sign up, do something active with your laces in, and tell your friends, family and colleagues about why you support LGBT equality in sport. You’ll get a pair of Rainbow Laces and hints and tips from Stonewall to help you raise vital funds and bring people on board.

I’ll be getting my cycling club on board with a special Rainbow Laces (or Rainjackets?!) bike ride. I’m looking forward to celebrating LGBT people in cycling and getting everyone thinking about how they can be allies to LGBT people who love our sport.

If you’re not into sport, you can still play your part in the fight for LGBT equality. Come Out Voting and sign our general election petition calling on all candidates to support Stonewall’s manifesto and keep pushing forward on LGBT rights. 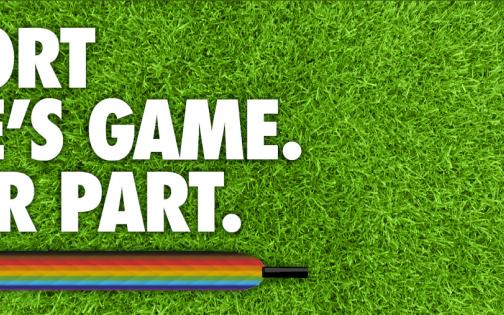