On 7 September, Bi Pride UK painted The Round Chapel in Hackney, pink, purple, blue and yellow, to promote bi visibility and discuss serious issues regarding bi erasure and biphobia.

Over 1,300 people came along to witness the jaw-dropping performers and powerful discussions, and Bi Pride UK can now proudly claim the title of the biggest bi gathering in history. 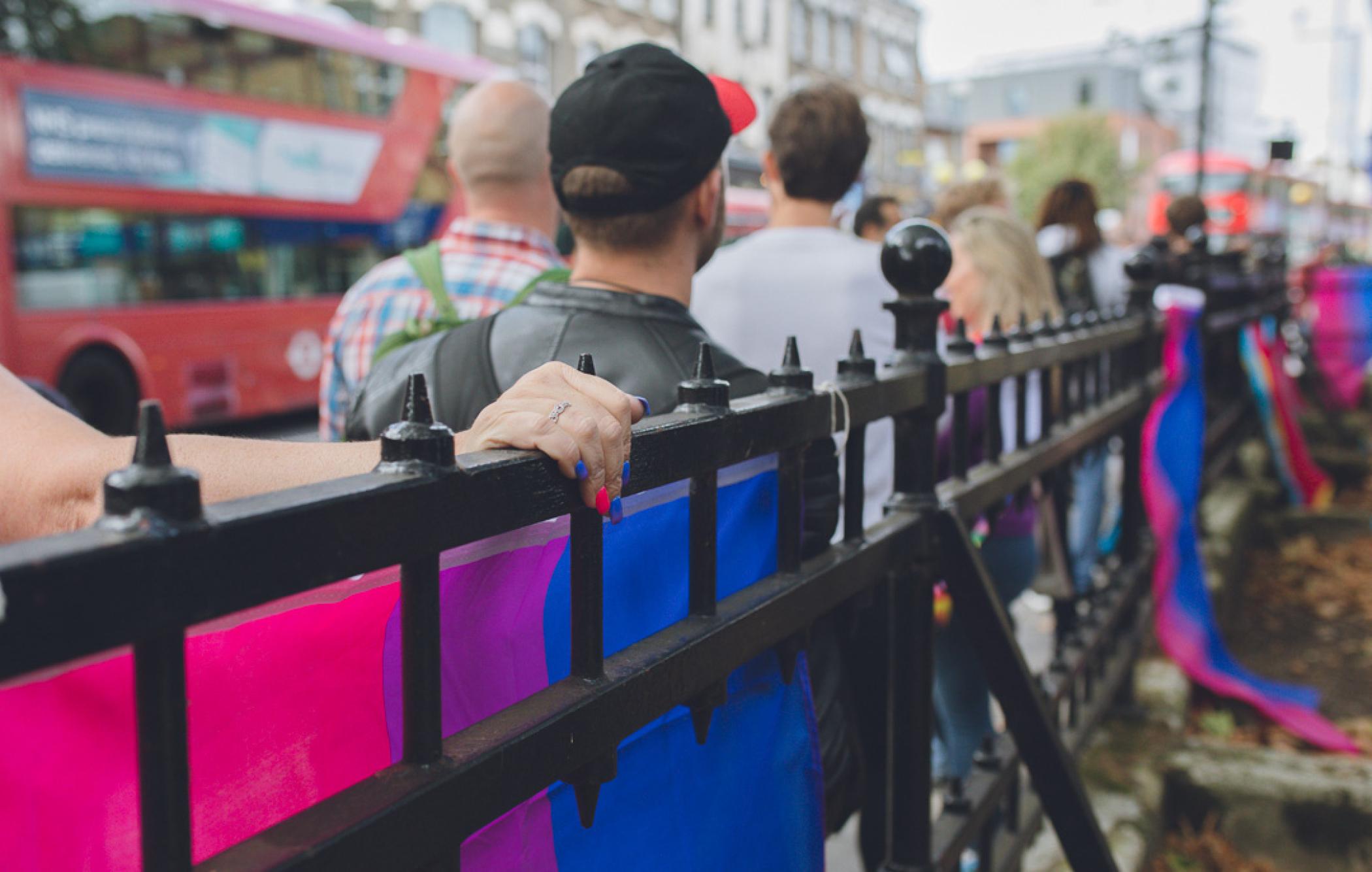 So how did we achieve our mission, and create a safe space for all bi individuals, at the UK's first ever Bi Pride?

The stage was set, the bi lighting was in full force, other LGBT charities and partner organisations were poised in the stall village (including akt, Stonewall and Switchboard), and we'd put in the hard work for over a year to raise awareness about the UK's first Bi Pride ... our amazing performers and acts did the rest. 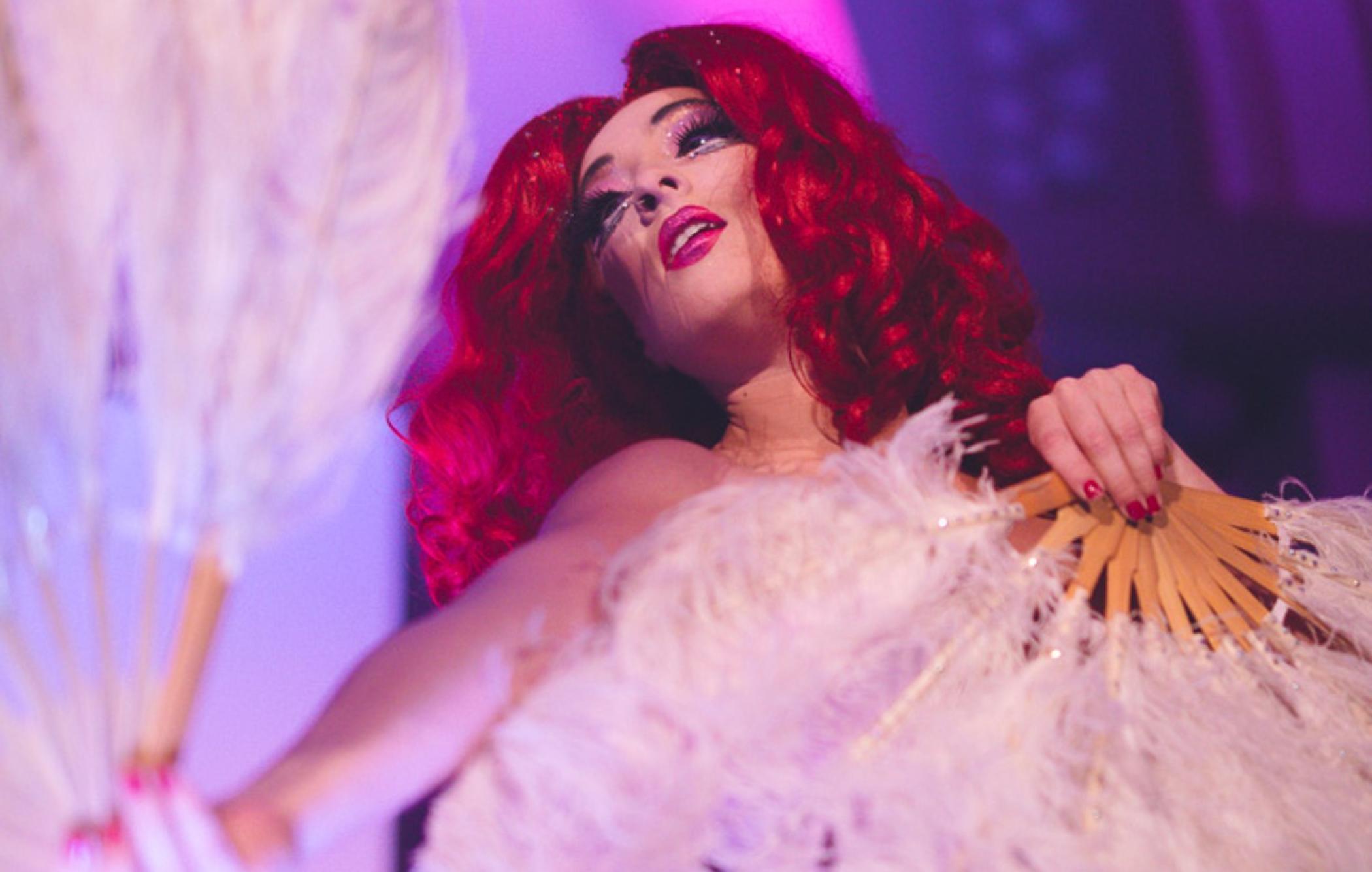 The main stage was home to exceptional talent, including comedians, drag acts, singers, spoken-word artists and many more.

The longest running LGBTQ+ choir in the UK, the Pink Singers, kicked things off with a powerful start. Our chair, Abigail Kay, a long-standing member of the choir, said 'We all had goosebumps stepping out there, as we felt we were starting something really special. Just before our performance, I actually choked when I saw the queue around the building to get into Bi Pride.'

Vocalist Victoria Falconer brought the stage to life with her performance of feminist disco debauchery, and Britney Spears-impersonating drag queen, Paviola, had us shouting 'gimme more' while waving the bi flag.

The drag acts had the audience in stitches, with drag-king collective The Family Jewels performing N Sync-like dance moves to 'Bye, bye, bye' and drag queens LADS had the public on the edge of their seats, as Lolo Brow seamlessly put an electric drill up her nose. And no, no acts were harmed in the making of Bi Pride. 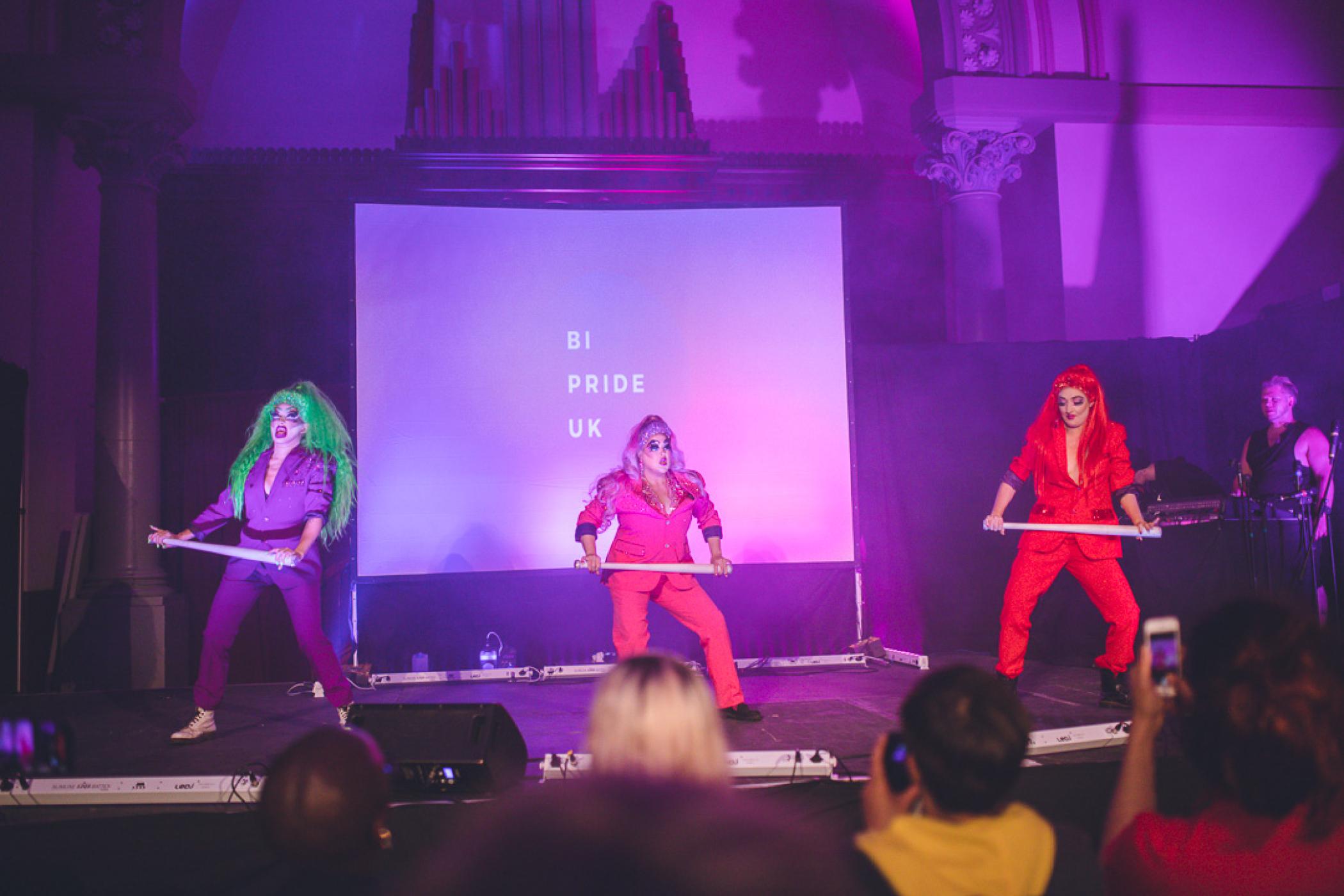 25-year-old, first-time Pride attendee Jess, said  "I've never seen so many incredible bi performers in one place. In fact, I didn't even know there were so many. Today really did give me the freedom to be my true self and it's the first time I've felt 100% comfortable with my pan identity."

The 'I Am Proud' stage was opened by Bi Pride UK media & comms manager, Lev Alexander, who announced we were "set to be the biggest bi gathering in history" (and thankfully we didn't disappoint).

Insightful discussions with well-known faces from the bi community ran throughout the day.

Highlights included the edtior of Fruitcake magazine and non-binary activist, Jamie Windust, discussing whether they experienced more discrimination because of their gender identity or their orientation, and, with a recent study finding that 78% of bi people had considered suicide, it was great to see a panel talking about bi mental healh on the ‘I Am Proud’ stage.

The idea that "people need to listen in order to learn, rather than in order to respond" was brought to the forefront by the 'Bi Erasure in the Spotlight' panel, which included The Bi Life's Irene-Elisabeth Ellis. 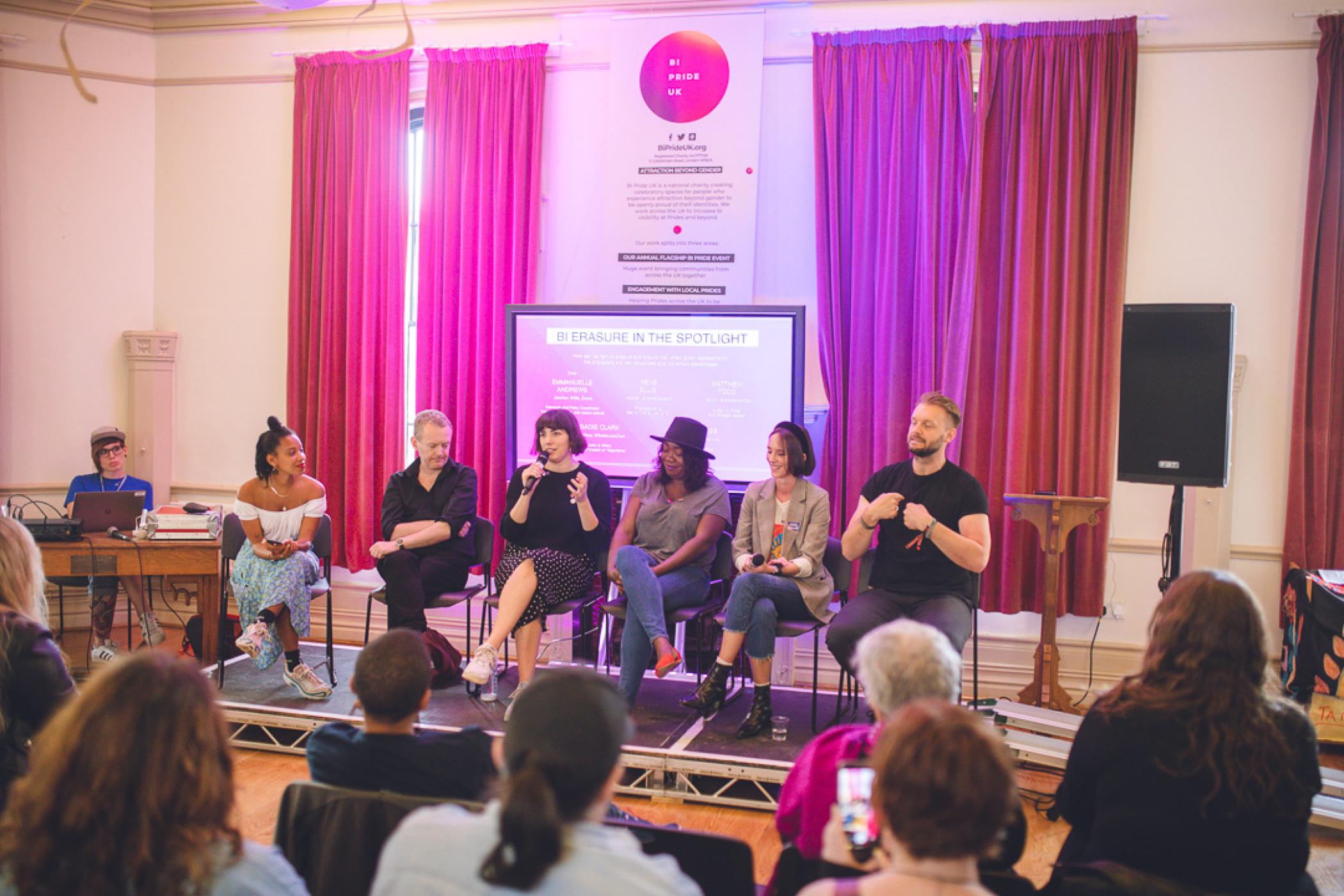 Vaneet Mehta, writer for The Bi-ble: Volume Two, joined a talk on the experience of an intersectional life, which had people queuing at the door and sitting cross-legged on the floor.

We are holding up mirrors and finally seeing ourselves.

Sharan Dhaliwal (editor in chief at Burnt Roti magazine) closed the stage and told us that "Validation is vital for many - be it a woman, a woman of colour, a bisexual woman of colour - there's no mirror we can hold up that reflects us. Bi Pride, one of the most inclusive Prides I have ever attended, gives us that validation. We are holding up mirrors and finally seeing ourselves." 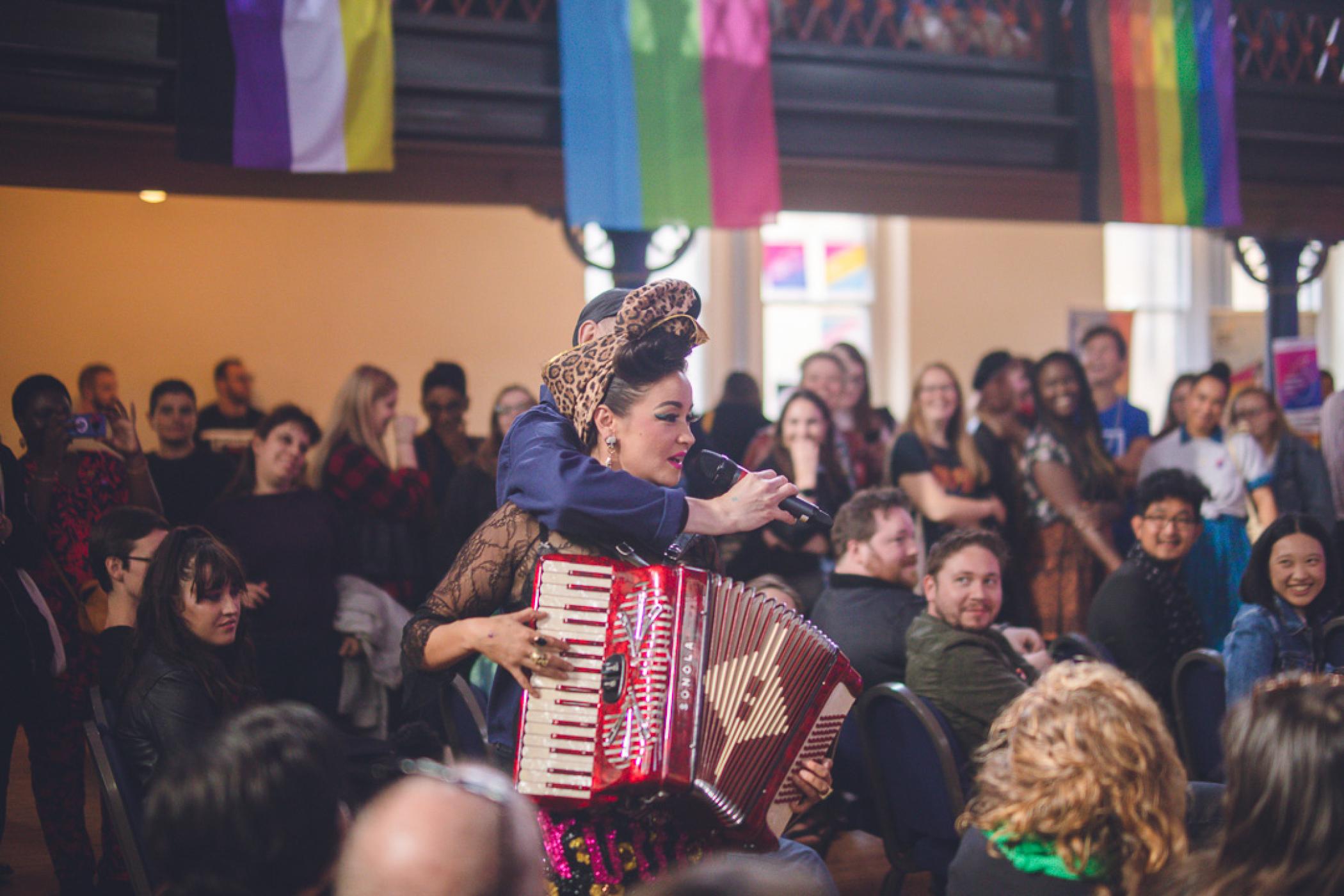 The hundreds and hundreds of smiling bi and ally faces throughout the entire day, and the positive feedback we received from the acts and the public, told us we really did accomplish what we set out to achieve - a safe space for all individuals who are part of the bi umbrella.

And although September was an amazing and eye-opening start, there's still much more to do to ensure bi issues are visible. It's necessary for Bi Pride UK, other LGBT organisations, and society as a whole, to continue projecting the bi identity as a positive and complete identity in its own right.