Today is the last day of LGBT History Month, a month-long celebration of our community's rich history. Our staff have been sharing some of their favourite LGBT heroes. What are yours? 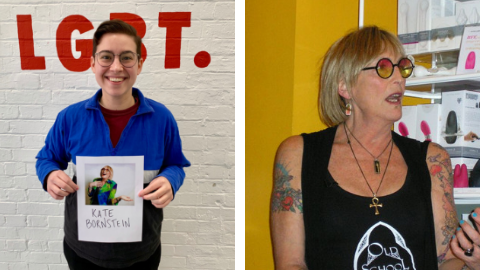 Liz Jacobs, our International Programmes Officer, says, 'My LGBT hero is Kate Bornstein, an incredible non-binary queer activist and writer. Kate makes space for people to unapologetically be their messy selves and go through life with heart and fun. We should all be more like Kate”, says . 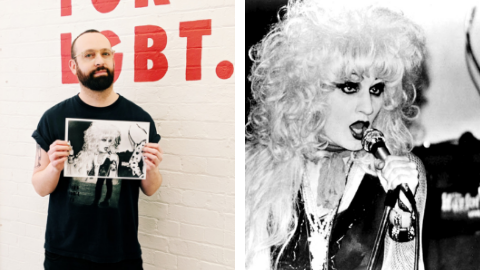 As a teen, her book 'Man Enough To Be A Woman' taught me it was OK to be weird and queer!' 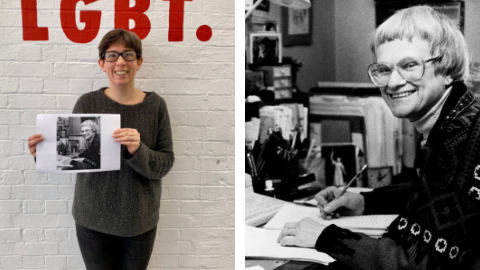 Sarah Hagger-Holt, our Campaigns and Communities Manager, says, ‘I discovered ‘Annie On My Mind’ in my local library as a teenager in the 90s and was blown away - this was the first young adult novel with a lesbian love story that ended happily. Read it countless times, showed me that my story and my life was valid when nothing else showed that and inspired me to write.’

Sandy Smith, our Office Manager, says, 'Billie Jean King helped me to think it was ‘ok’ to be a girl and play tennis and basketball; the sports I loved when I was growing up.

Her single-minded determination to question patriarchy and tradition outshone her personal ambition; so more than a sports hero, she is a leader for everyone.

She has created foundations for not only women and girls within sport, but also the support and equality among all people regardless of gender, race or sexual orientation. She purveyed equality while standing up for women’s rights, regardless of anyone’s opinion.' 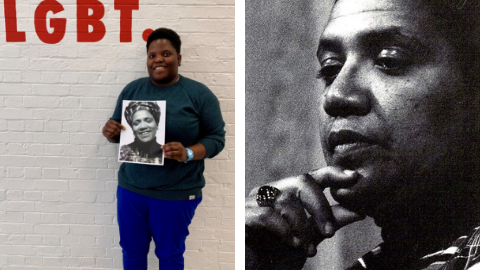 Yassine Senghor, one of our Client Account Mangers, says, 'Intersectional feminist, lesbian, black, woman, intellectual, activist, socialist, poet, teacher, mother warrior, intrepid traveller, and advocate for sexual freedom - Audre Lorde showed me that 'It is not our differences that divide us. It is our inability to recognize, accept, and celebrate those differences.'' 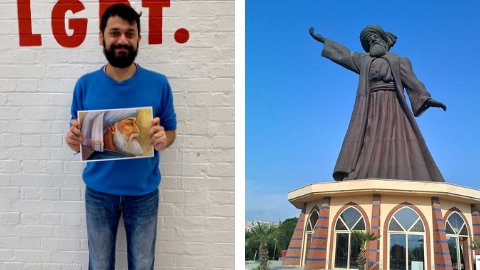 Qaisar Siddiqui, our Programmes Development Officer, says, 'The mystical poetry of Jalal al-Din Rumi has inspired countless devotees, both in spite of and thanks to his iconoclastic approaches to love, sex, and prayer. 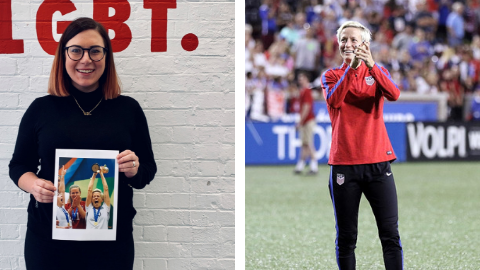 Erin Walters-Williams, our Sport Empowerment Officer, says, 'Megan Rapinoe is a US football player, World Cup and Olympic champion, and absolute all-star. She was one of the first pro players to publicly come out as a lesbian and been a very visible activist for LGBT rights + gender equality. Her intersectional allyship is awesome too - from kneeling for the national anthem to her advocacy on social media, she uses her platform for good.

In terms of high-profile LGBT visibility when I personally really needed it, Megan was there

In terms of high-profile LGBT visibility when I personally really needed it, Megan was there. Having role models in the sports I played growing up went a long way in the development of my sense of self, knowing that there were all these women—some of whom were openly lesbian or bi—who loved the sports I loved and were considered strong, powerful, and accomplished as a result of it.' 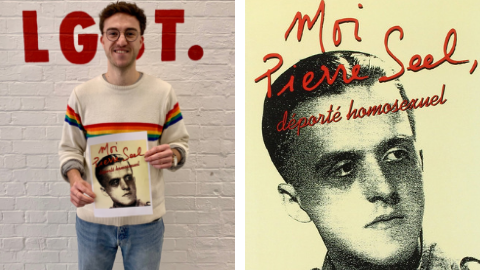 Nick Slater, one of our Client Account Managers, says, ‘My LGBT hero is Pierre Seel, a survivor of the Holocaust and the only French person to testify openly about being imprisoned by the Nazis for being gay. After the war ended, he was forced to hide his sexual orientation, his past and the reason for his deportation for 44 years, before putting his name to an anonymous testimony in 1982. He then published his memoir, I, Pierre Seel, Deported Homosexual, in 1994.

Reading his memoir and learning about his story, alongside the experience of thousands of other persecuted LGBT people during WWII, was instrumental in my own personal journey of coming out and acceptance, and eventually working for Stonewall.' 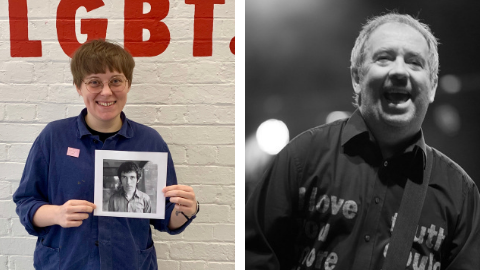 Antonia Lines, our Senior Empowerment Programmes Delivery Manager, says, 'My LGBT hero is Pete Shelley from Buzzcocks. Thanks to my dad, Buzzcocks were the first band I ever heard and ‘Ever Fallen in Love (With Someone You Shouldn't've)’ was my favourite song long before I could fathom its meaning. I had no idea Pete was bisexual, but by the time I got to my teens I started to connect with the lyrics more.

His songs showed that beyond the macho face of punk, you were allowed to be soft and vulnerable.

He was an incredible songwriter; his songs showed that beyond the macho face of punk, you were allowed to be soft and vulnerable. Pete’s songs gave me a way to communicate my feelings with my dad, I didn’t have to come out to him, he knew I was queer, because we’d shouted the lyrics to ‘What Do I Get’ together at a punk show and I’d stolen all his X-ray Spex records.

Buzzcocks were one of the UK's most influential punk bands and Pete didn’t hide his bisexuality, he said he ‘wrote lyrics that were ambisexual, that do not exclude anyone.’ When he was asked about who they might exclude, he said “the only people they exclude are people that don’t know anything about love.' 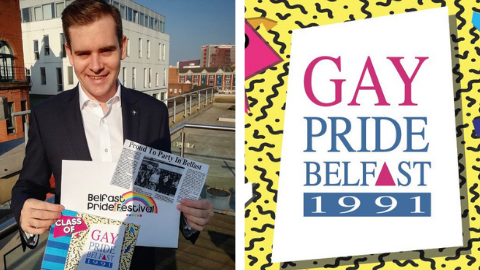 Fergal McFerran, our Client Account Manager, Northern Ireland, says, 'Pride is now the single largest cross-community event in Belfast but that would never have happened if it weren't for the 100 or so people who took to the streets for the first in 1991. Their courage was and still is inspiring.' 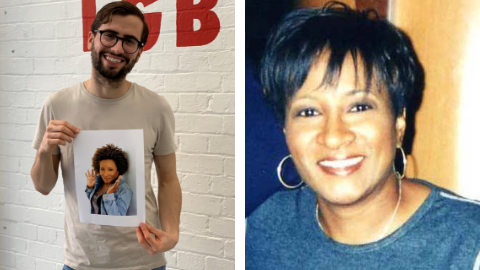 Jeff Ingold, our Media Manager, says 'I remember being so inspired by Wanda Sykes when she came out at a same-sex marriage rally against Proposition 8 in California. She powerfully uses comedy and humour to change hearts and minds about LGBT people. 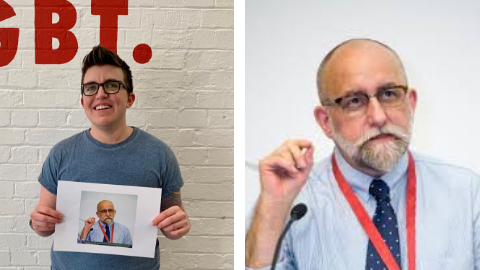 Chay Brown, our Education Programmes Officer, says, 'Stephen was the first trans man I was ever aware of - I saw him on a documentary when I was a teenager. Before that I didn’t know that trans men even existed, I had only ever seen trans women represented.

If it weren’t for the work of Stephen and other longstanding trans right campaigners, my life would be much harder

Stephen has a long history of campaigning for improved trans rights. If it weren’t for the work of Stephen and other longstanding trans right campaigners, my life would be much harder than it is now.' 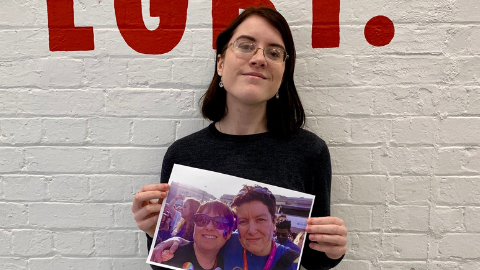 Adelaide Robinson, our Prospect Research Officer, says 'My LGBT heroes aren't historical figures but my aunts, Sarah and Debbie. Growing up with lesbian relatives in a loving and committed relationship meant I never had to look far to know I wasn’t alone.

I loved visiting their house and spent hours staring at their witty fridge magnets emblazoned with Pride flags and lesbian humour. My mum says she remembers me falling asleep in my aunts’ bed during a party and saying the next day, 'Auntie Sarah and Auntie Debbie sleep in one bed just like you and dad, don’t they?' And that was that.

Growing up with gay being normal means I remember the first time I ever became aware of real homophobia. I was proudly boasting about having a day off from school to attend my aunts’ civil partnership. This didn’t go down well, and my teacher had to explain to a heartbroken eleven year old that some people didn’t support the kind of love I’d grown up being comforted by. The wedding was fabulous, and the brides looked very dashing in their tailored suits. The next time we went to a wedding, I wore a suit too.'

Find out how you can Come Out For LGBT today. 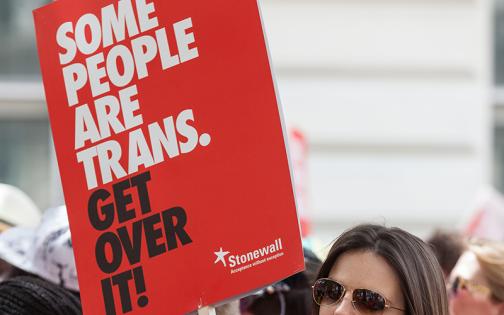 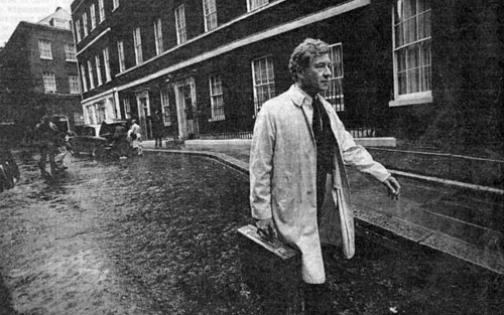